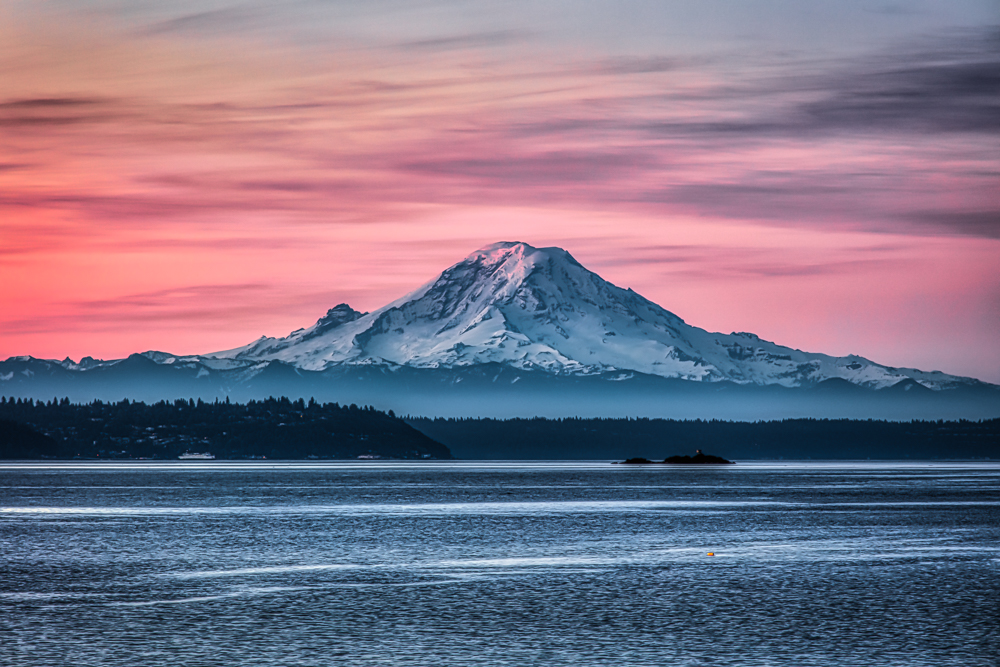 Most places have their share of local icons, and Washington State is no exception.  One attraction that would surely make the short list of most Washingtonians is Mount Rainier.  The majestic summit stands at an elevation of 14,411 feet, making it one of the highest mountains in the continental U.S.  It also has the largest glacial system in the lower 48 states with 25 named glaciers.  On March 2, 1899, President William McKinley established Mount Rainier National Park as America’s fifth national park.

Long before European explorers first arrived, Mount Rainier was known as Talol, Tacoma, or Tahoma by Northwest American Indians.  Upon observing the mountain in early May 1792, Captain George Vancouver named it after his friend, Rear Admiral Peter Rainier, who served as a Royal Navy officer in the Revolutionary War.  Seventy-eight years later in 1870, two adventurous souls – aptly named Hazard Stevens and P.B. Van Trump – were the first to successfully make it to the top of the summit.

Located less than 100 miles south of Seattle, Mount Rainier dominates the southeastern horizon in most of the Seattle-Tacoma metropolitan area to the extent some locals just refer to it as “the Mountain.”  Unfortunately, a sighting can’t always be taken for granted.  From June through September when sunny skies can be the norm, Mount Rainier is visible more often than not – but the rest of the year can be a total crapshoot.  One quick way to find out is by visiting https://ismtrainierout.com/, which shows the southerly view from a webcam on top of the Space Needle.

When not being shy, Mount Rainier is always very photogenic – so let me provide five compelling examples.

The featured image was taken from the east side of Bainbridge Island, which is a 35-minute ferry ride from Seattle.  It was taken at the crack of dawn during what many photographers refer to as the “golden hour” – though this can obviously include pinks as well.  The smaller peak to the left is known as Little Tahoma Peak, which if considered separately from Mount Rainier, would be the third highest mountain peak in Washington. 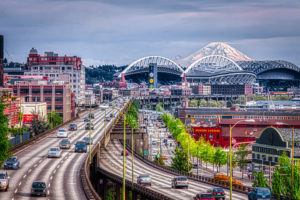 The side image to the right is partly for nostalgia buffs.  While showing the proximity of Mount Rainier to Seattle, it also displays the Alaskan Way Viaduct, which was a double-decker freeway that traveled through downtown Seattle alongside the western waterfront facing Elliot Bay until it was completely demolished for safety reasons in 2019.

The side image to the left was taken from a ferry making the crossing from Seattle to Bainbridge Island.  While midday usually offers the least flattering light for photography, the location of the sun almost directly above Mount Rainier is what caught my eye. 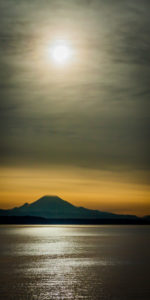 The third side image depicts Mount Rainier from the southwest corner of Bainbridge Island.  If you look closely, you will see a lenticular, or saucer-shaped, cloud on the top of the mountain – though I personally think it looks more like a toupee than a cloud. 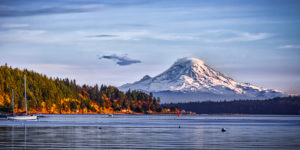 Last but not least, the bottom image is a panoramic shot of Mount Rainier – also taken from the east side of Bainbridge Island – consisting of two separate images stitched together using software in the digital darkroom.  I love a good black-and-white photograph, and a good argument could be made that a monochrome of Mount Rainier has just as much (if not more) drama than a color version.

An underappreciated fact is that Mount Rainier is an active volcano.  Although it hasn’t erupted since 1854, the mountain is listed as a Decade Volcano, which means it’s one of 16 volcanoes in the world with the greatest likelihood of causing loss of life and property if eruptive activity resumes.  That being the case, while it would be nice to get some close-up shots when normal times return, for now I’m quite content to keep my distance.

We have a good selection of Mount Rainier images in our online store.  For specifics, please visit our Ferries/Puget Sound and Bainbridge Island galleries.  And since my wife Carol and I love visitors, please stop by our brick-and-mortar store on Bainbridge Island if you happen to be in our neck of the woods.  In the meantime, Carol and I hope everyone is staying healthy and safe as we continue to navigate through these tricky times.