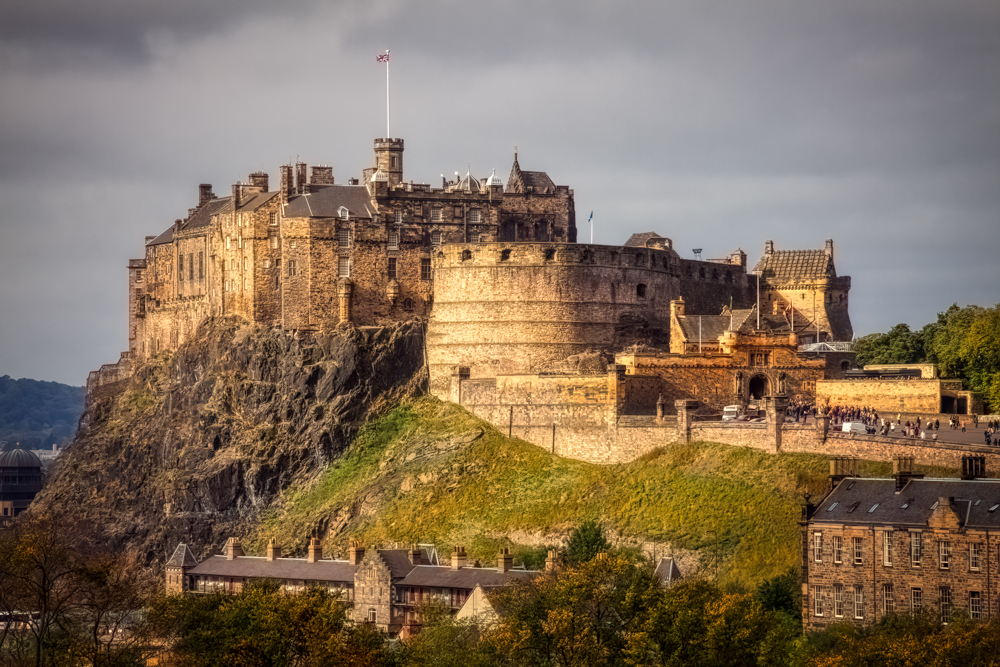 From the perspective of an anglophile like me, Edinburgh offers the best of both worlds. While its history, culture and traditions are inextricably linked to the rest of Great Britain, the capital of Scotland has the sophisticated, cosmopolitan feel of many European cities.

The city of Edinburgh is synonymous with its iconic castle, an ancient fortress dating back to the 11th century which dominates the skyline from its perch atop a pile of volcanic rock. As one of the most important strongholds in the country, the citadel has been involved in many historical conflicts over the centuries, with research recently undertaken in 2014 identifying 26 sieges in its 1,100-year history. No surprise, then, that Edinburgh Castle can lay claim to being “the most besieged place in Great Britain and one of the most attacked in the world.” Nowadays, however, the castle is mostly besieged by tourists. With over 2.2 million visitors in 2019, it is the United Kingdom’s second most-visited paid tourist attraction. (Predictably, the Tower of London hit the top spot that year with almost three million visitors.)

While it’s easy to spend several hours exploring the castle and its exhibits, one of the highlights is the panoramic view of Edinburgh, which is situated next to the picturesque Firth of Forth, an arm of the North Sea that thrusts westward into the Scottish Lowlands. In the below image, taken from one of the castle’s battlements, the large open paved area filled with people is the Esplanade, home of the Royal Edinburgh Military Tattoo, which this year is scheduled for three weeks in August. If you enjoy military bands with plenty of bagpipes and drums, then this is your Super Bowl! Off in the distance is Arthur’s Peak, an extinct volcano which is the main summit of Salisbury Crags, a group of hills neighboring Edinburgh. 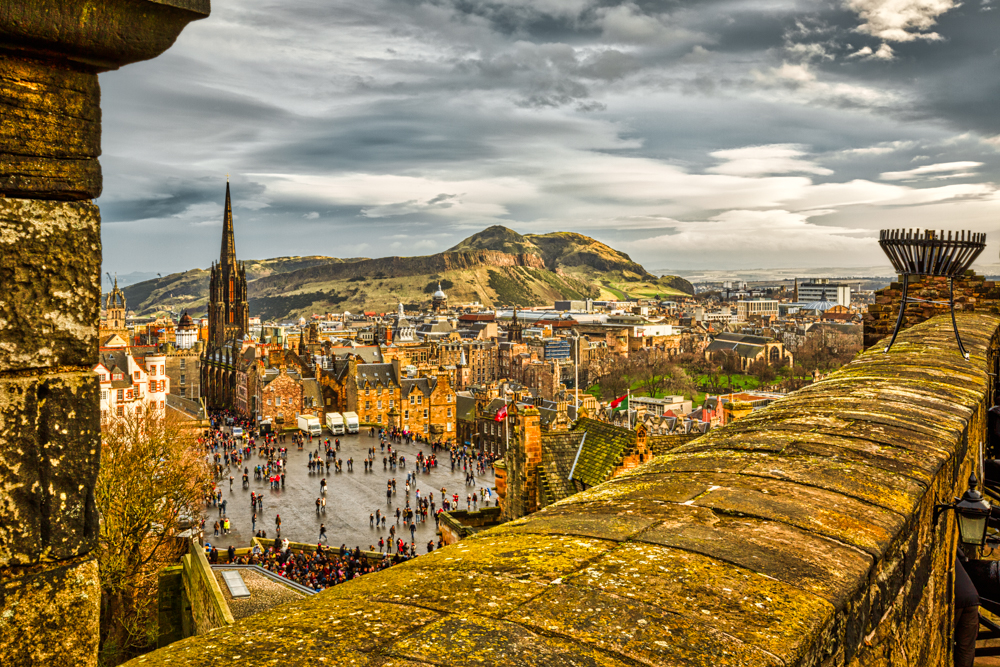 The Esplanade spills out onto the Royal Mile, which is the main thoroughfare – and busiest tourist area (see below image) – in Edinburgh. Just a “Scots mile” long (about 1.1 U.S. miles), the street descends from Edinburgh Castle to the Palace of Holyroodhouse where Queen Elizabeth II stays during her annual summer visit to the city. Despite its short length, the Royal Mile consists of five individually named sections: Castlehill, Lawnmarket, High Street, Canongate, and Abbey Strand. While I admittedly have no proof, I’m convinced the Scots did this so innocent tourists would be thoroughly confused! If you enjoy pub crawls, you will absolutely fall in love with the tavern choices on and around the Royal Mile. My personal favorite is the Jolly Judge, where I hope to return some day with my wife Carol to see if our dollar bill is still taped to the wooden ceiling beam. 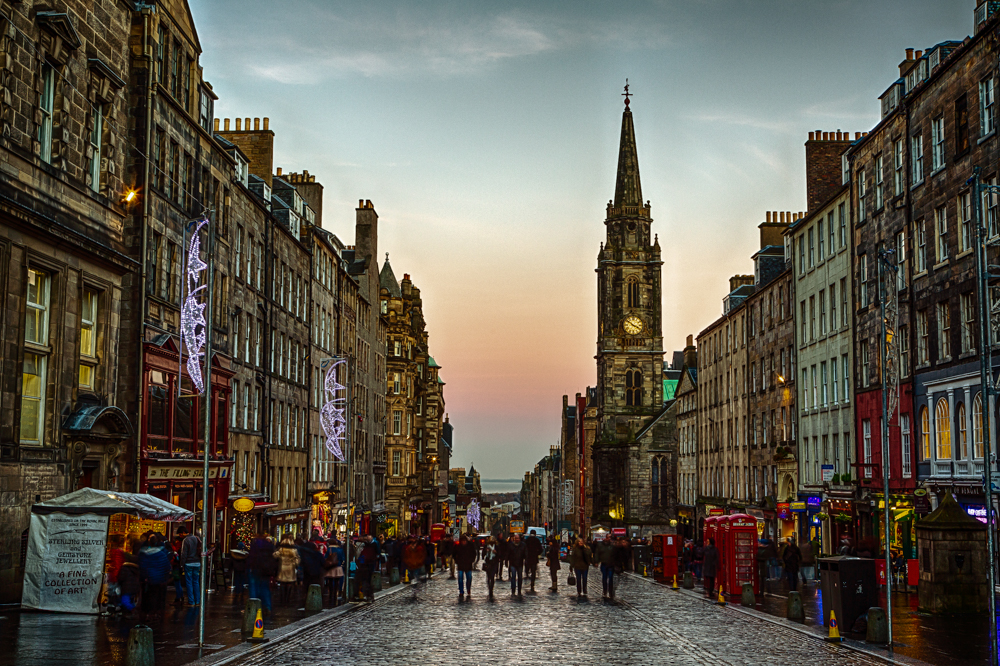 If you need to recover from a pub crawl or just want fresh air, you can’t go wrong with a morning hike to the top of Arthur’s Seat in Holyrood Park. Besides the exercise, your reward (see below image) will be stunning views over the city, with Edinburgh Castle and the Gothic spire of St. Giles Cathedral on the Royal Mile off in the distance. 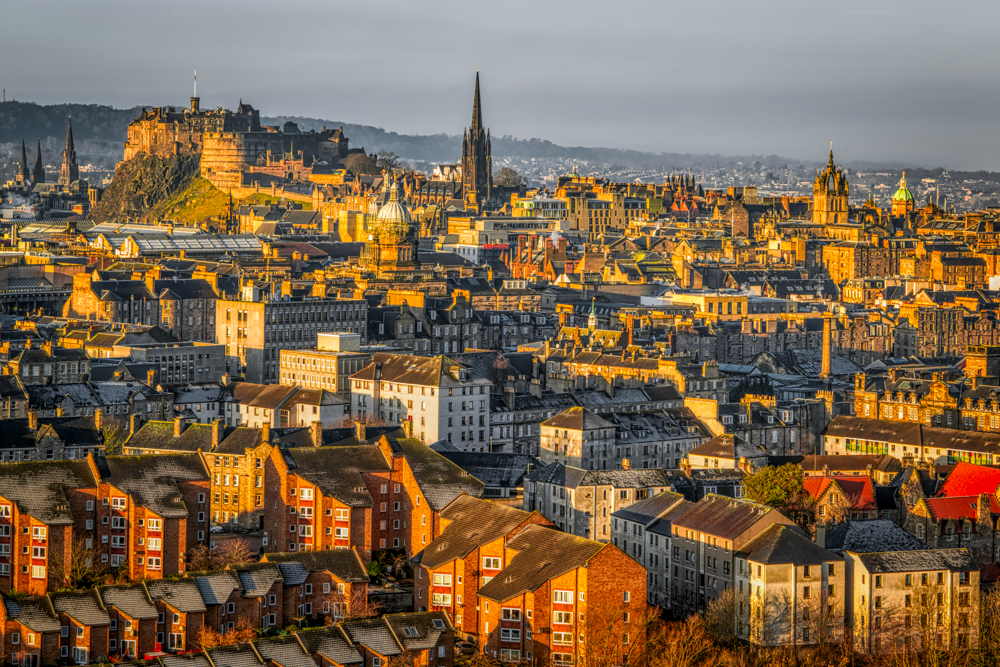 We complete our visit to Edinburgh with one last image called “Ten After Ten” (if you look closely enough, you’ll figure out why). I also call it my Mary Poppins shot because (at least in my mind) it conjures up a vision of Julie Andrews in her role as the fictional super-nanny who flew above rooftops with her parrot-headed umbrella. While purists may observe this Disney classic was actually set in London, its Victorian-era architecture, including the ubiquitous rows of cream-colored chimneys and turreted rooftops, is likewise found in Edinburgh. 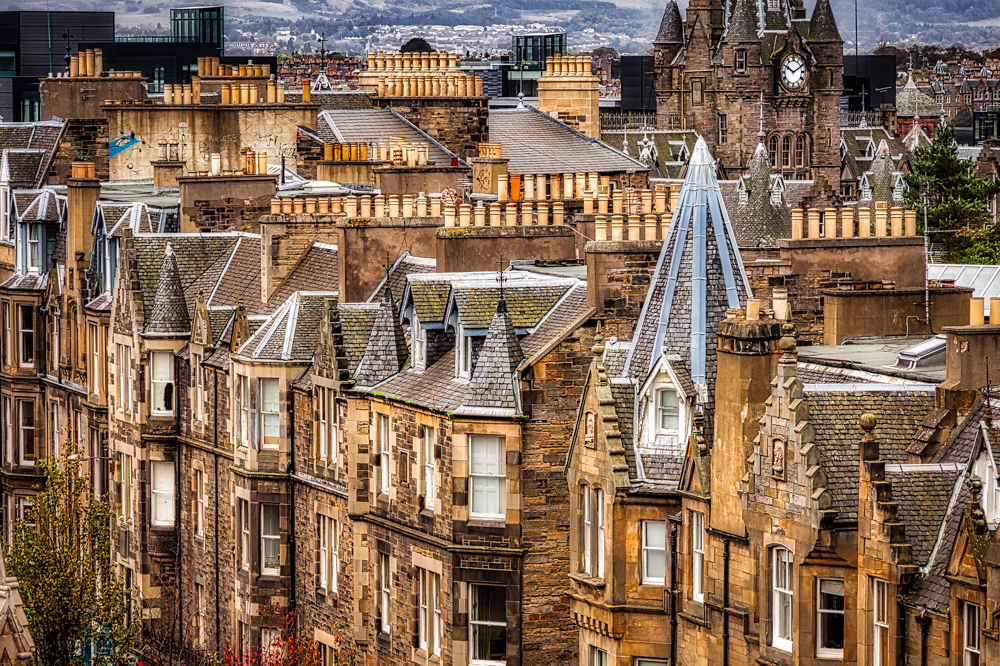 All of our Edinburgh images are now on display in the United Kingdom gallery of our online store. They are available in different mediums, including metal, canvas, and fine art acrylic prints, with sizes ranging from 15×30 (panoramic) to 24×36 (standard). For other options, however, please feel free to contact us by email or phone. In addition, we also have a wonderful assortment of matted prints at our brick-and-mortar store on Bainbridge Island. Carol and I love visitors – plus, there is no limit on browsing time! – so please drop by should you be in our neck of the woods. In the meantime, we hope everyone is staying healthy and safe as the world continues to navigate through these tricky times.