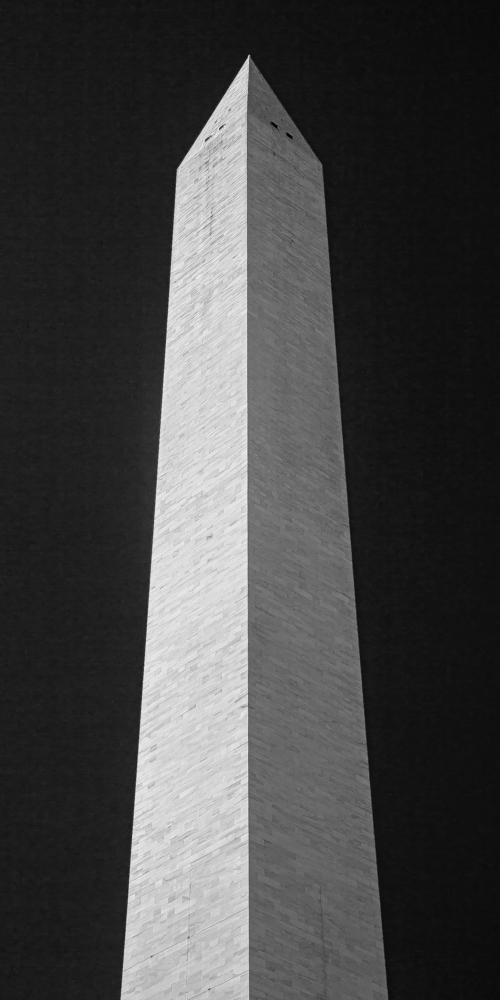 Though my blog focuses on photography, that doesn’t mean I’m oblivious to current events.  Consequently, following the violence in the District of Columbia on Jan. 6, 2021, I posted a black and white image of the majestic U.S. Capitol Building where the bloody insurrection by a mob of Trump supporters took place.  This time, I’d like to pay tribute to one of the iconic memorials near the opposite end of the National Mall: the Washington Monument.

“First in war, first in peace, and first in the hearts of his countrymen.”  These famous words about George Washington come from a eulogy written by Henry “Light Horse Harry” Lee, one of his close friends who also served as a commander in the Revolutionary War.  While the space for a monument to our most important Founding Father had long been reserved, nothing happened until 1833 when a private organization – the Washington National Monument Society – was formed to finance and oversee the effort.  Despite difficulties raising funds, construction began in 1848 – but abruptly stopped six years later after the society filed for bankruptcy.  By this point in time, the monument wasn’t even one-third built. Twenty two years – and one Civil War – later, Congress assumed the duty of funding and erecting the monument, which was constructed by the U.S. Army Corps of Engineers and finally completed in 1884.

Built in the shape of an Egyptian obelisk to evoke the timelessness of ancient civilizations, the monument was originally designed to be 600 feet high with ornate adornments and encircled by 30 100-foot columns.  These plans were ultimately scrapped in favor of the clean, stark look of the simple obelisk shape visible today.  Upon completion, the memorial impressively surpassed the Gothic cathedral in Cologne, Germany, as the then tallest building in the world at exactly 555 feet and 5.125 inches.

As shown by the side image, the Washington Monument is not monochromatic.  That’s because the 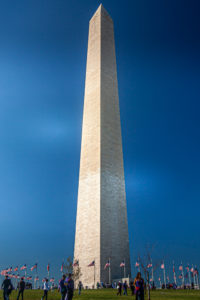 quarry used for the bottom one-third was no longer available when construction resumed, and the stone from the replacement quarries used for the top two-thirds didn’t match perfectly.  Even so, the monument – towering above the city that bears his name – is an awe-inspiring reminder of George Washington’s greatness.

While not presently available in our online store, we have a nice assortment of images from the District of Columbia at our gallery on Bainbridge Island, which will hopefully provide yet one more reason to stop by for a visit if you happen to be in our area!  As we continue to slowly edge closer to more normal times, partner Carol and I sincerely hope that you and everyone in your world are staying healthy, safe, and strong.