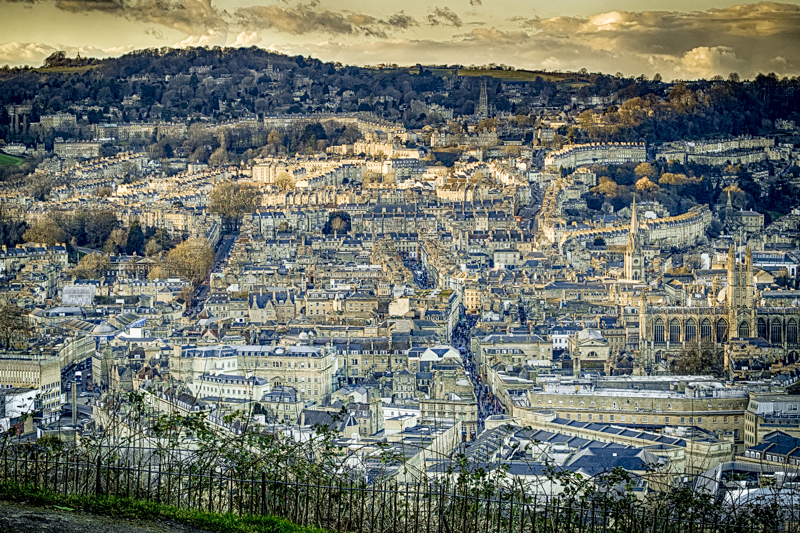 I’m on a roll!  Since I had never featured an image from the United Kingdom until my last post, I thought I would follow it up with another.  Let me add that there will be plenty more to come, as I celebrated my 65th birthday last September by walking Hadrian’s Wall in northern England with my sidekick Carol.  We hiked 84 miles from coast to coast in just six days and then rested our weary feet by touring the Cotswolds by car for nine days.  So yes, this Anglophile has many more images to share!

With an assist from Bill Shakespeare, most people know about Julius Caesar and the vast empire established by the ancient Romans throughout Europe, Africa and Asia.  A lesser known fact is that during their heyday, the Romans occupied the isle of Britannia – now called Great Britain – for over three centuries.  That’s pretty impressive when you consider the United States has been around for 242 years!

The English city of Bath provides a perfect example of how the Romans were way ahead of their time.  Taking advantage of unique thermal hot springs in the area, they built a sophisticated bathing complex – complete with temple – that made it one of the greatest religious spas of the ancient world.  The British picked up where the Romans left off, as Bath became a popular spa town in the 18th century.  Its Georgian-era architecture, made from local Bath stone, predominates, including the Grand Pump Room adjacent to the baths where brave souls can sample the sulfur-tasting water for free.

The featured image (“Bath Vista”) was taken from Alexandra Park, a tranquil green space atop a wooded hillside that provides magnificent panoramic views of Bath.  Too timid to ask the locals for directions, Carol and I took what proved to be a very roundabout and meandering route, including a final stretch through steep and muddy fields replete with animal-made land mines (if you catch my drift).  As we began our descent, we were both chagrined and relieved to find a long flight of steps providing easy and direct access to the bottom.  No real complaints, though, as the views (and the exercise) were more than ample rewards for our labor.

At our gallery on Bainbridge Island, we presently feature images from Bath on matted, metal, canvas, and fine art acrylic prints.  But even if you aren’t an Anglophile, I think you’ll find an excellent assortment of photographic products.  For gallery hours, please consult the Contact page on our website.