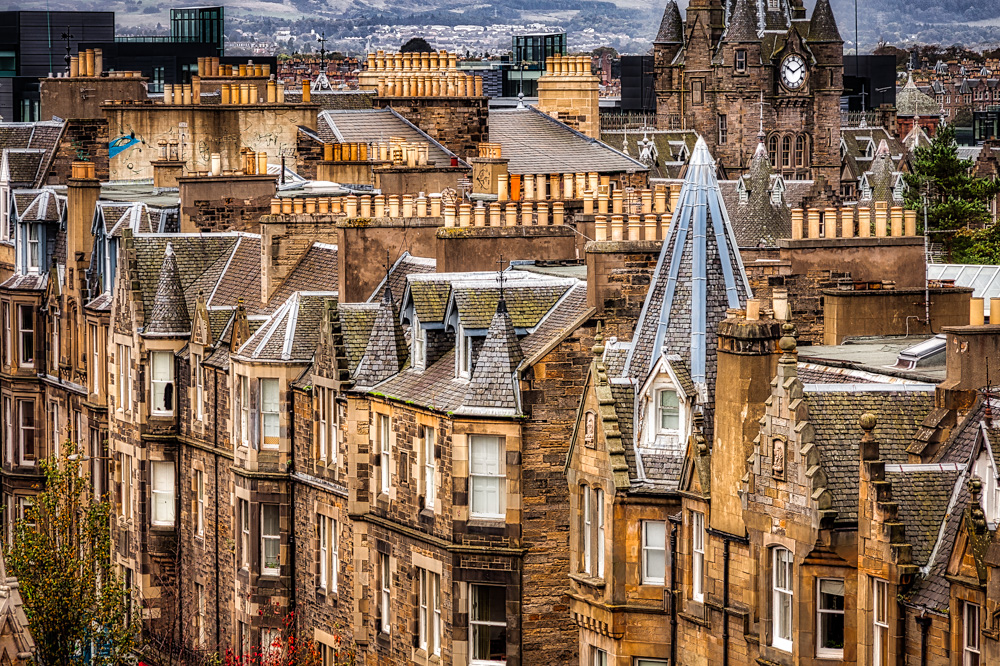 Let’s make it a threefer!  Two posts ago, this devout Anglophile finally got his act together by featuring an image from the United Kingdom.  (It was a shot from London called “Piccadilly in the A.M.”)  Last post, I presented an image from the English town of Bath, which got its name from the famous baths built by the Romans about two millennia ago.  To round out the trifecta, in this post we venture north to showcase an image from Edinburgh, the captivating capital of Scotland.

The official title of the above image is “Ten After Ten” (if you look closely enough, you’ll easily figure out why).  I informally call it my Mary Poppins shot, however, because (at least in my mind) it conjures up a vision of Julie Andrews in her role as the fictional super-nanny who flew above rooftops with her parrot-headed umbrella.  (While purists may observe this Disney classic was actually set in London, its Victorian-era architecture, including the ubiquitous rows of chimneys, are likewise found in Edinburgh.)

So how do you photograph rooftops without a flying umbrella of your own?  In this instance it was simple because the National Museum of Scotland – a top-five attraction should you ever visit Edinburgh – has a roof-top terrace with a panoramic view of the city.  Although my main goal was to grab a pic of Edinburgh Castle, an historic fortress dating back to the 11th century which dominates the skyline from its perch atop a pile of volcanic rock, I was quickly distracted by the plethora of cream-colored chimneys and turreted rooftops on the Victorian row houses directly across the street.  (It’s just a matter of time before I have a gallery on my website exclusively featuring rooftops.)

So have you already made your plans for New Year’s Eve?  If not – and in case you aren’t yet convinced a trip to Edinburgh should be on your bucket list – you need to know about Hogmany.  Simply put, Hogmany is one of the world’s largest New Year’s Eve parties – and then some!  When sidekick Carol and I attended the three-day event in 2014, it included a torchlight procession on Dec. 30 (where thousands of torchbearers forge a river of light through the streets of Edinburgh’s Old Town and New Town); a candlelit concert on Dec. 31 at St. Giles’ Cathedral on the Royal Mile (Old Town’s oldest and main thoroughfare) followed by a raucous outdoor party with 70,000 revelers in the park below Edinburgh Castle; and a host of cultural events on New Year’s Day to distract you from whatever hangover you may have.  For more details on this year’s Hogmany, click here.

At our gallery on Bainbridge Island, we have images from London, Bath, Edinburgh and other UK locations on matted, metal, canvas, and fine art acrylic prints.  But whatever your geographic preference, I think you’ll agree we have an excellent assortment of photographic products.  For gallery hours, please consult the Contact page on our website.