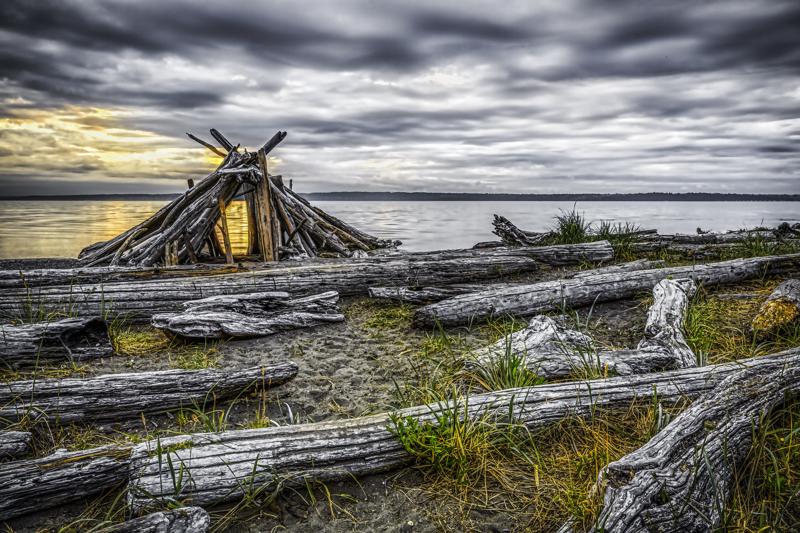 I’ve been shirking my duties as an unpaid volunteer for the Bainbridge Island Chamber of Commerce, so it’s time for a local image.  The featured shot depicts a short segment of the public beach at Fay Bainbridge Park, which is situated on the northeast tip of Bainbridge Island.  The 17-acre park, which includes 1,240 feet of pristine shoreline on Puget Sound, is a popular year-round spot for picnicking, camping, kayaking, and other outdoor activities.

Time for a bit of local history.  Many moons ago in 1841, Captain Charles Wilkes, a U.S. naval officer, visited the island while surveying the Pacific Northwest for the federal government.  He chose to name the island after Commodore William Bainbridge, who commanded the frigate USS Constitution (aka Old Ironsides) in the War of 1812.  (Apparently the favor was somehow later returned, as one of Bainbridge Island’s three elementary schools is named after Captain Wilkes.)

So in my simple mind, I figured that in order to have an island park named after her, Fay Bainbridge must’ve been either the commodore’s wife or one of his descendants.  But did I ever miss the mark!  Turns out that one Temple Fay was a successful neurosurgeon who taught at the University of Washington (and who also introduced the use of hypothermia in medical and surgical illnesses).  In 1944, the state bought the land for the park from Dr. Fay’s estate for $5,000 with the stipulation that the name “Fay” be maintained in perpetuity.  Originally called Fay Bainbridge State Park, the title was shortened to its current name in 2009 after the state parks system turned over the park to local authorities.

The featured image – taken early yesterday morning – shows how timing can sometimes be critical.  The awakening sun – temporarily blocked from view by the top of the driftwood teepee – is what caused the fiery gold reflection in the middle of the structure.  Despite setting up my gear as quickly as possible, I only had time for one sequence of shots before the sun was covered by clouds.

We have a wide selection of Bainbridge Island images at our gallery on Bainbridge Island, including an excellent assortment of metal prints, canvas prints, custom-framed black-and-white prints, and fine art acrylic prints.  We are just a short walk from the ferry terminal, so please stop by if you happen to be on our side of the water!  For gallery hours, please consult our Contact page.