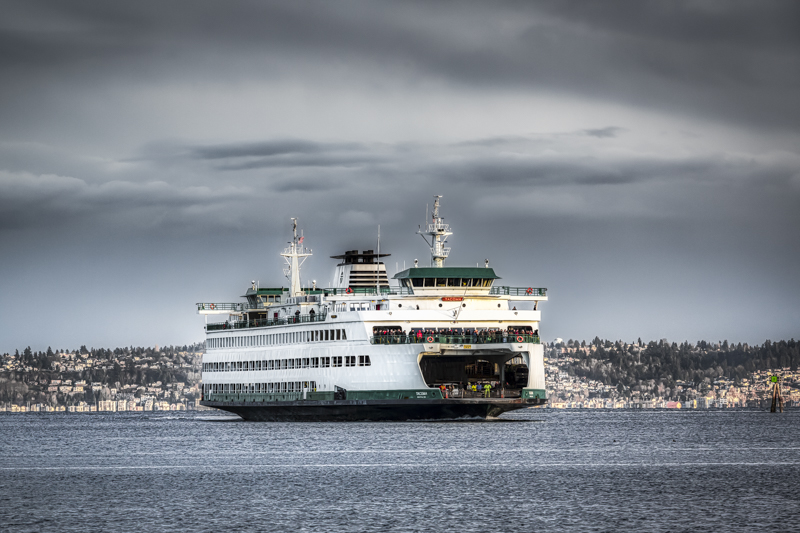 Since four of my last five posts related to two European canal cities (Venice and Amsterdam), it’s time to cover something closer to home.  For those who live in the Puget Sound area, nothing gets much closer to home than our state ferry system.  For example, according to MapQuest, it would take me one hour and 41 minutes to drive 91.9 miles from downtown Bainbridge Island to the ferry terminal in downtown Seattle.  Or, I could enjoy a scenic and stress-free ferry ride and get there in just 35 minutes.  So you tell me, is that a no-brainer or what?

Here are some interesting factoids about the Washington State Ferries (WSF):

The ferry in the featured image is the M/V Tacoma, which is regularly used for the commuter run between Seattle and Bainbridge.  A Jumbo Mark II class ferry, the M/V Tacoma entered service in 1997 and originally carried up to 218 vehicles and 2,500 passengers.  Nowadays – apparently due to that “fat factor” – the vehicle capacity has been capped at 202 vehicles.

WSF ferries like the M/V Tacoma are not only iconic – they are also very photogenic.  We have a nice assortment of ferry images at our gallery on Bainbridge Island, including matted prints, metal prints, canvas prints, and fine art acrylic prints, so do please feel free to stop by the next time you’re in our neighborhood.  For gallery hours, please consult our Contact page.