Image of the Week: In Her Memory | Andrew Bergh Travel Photography 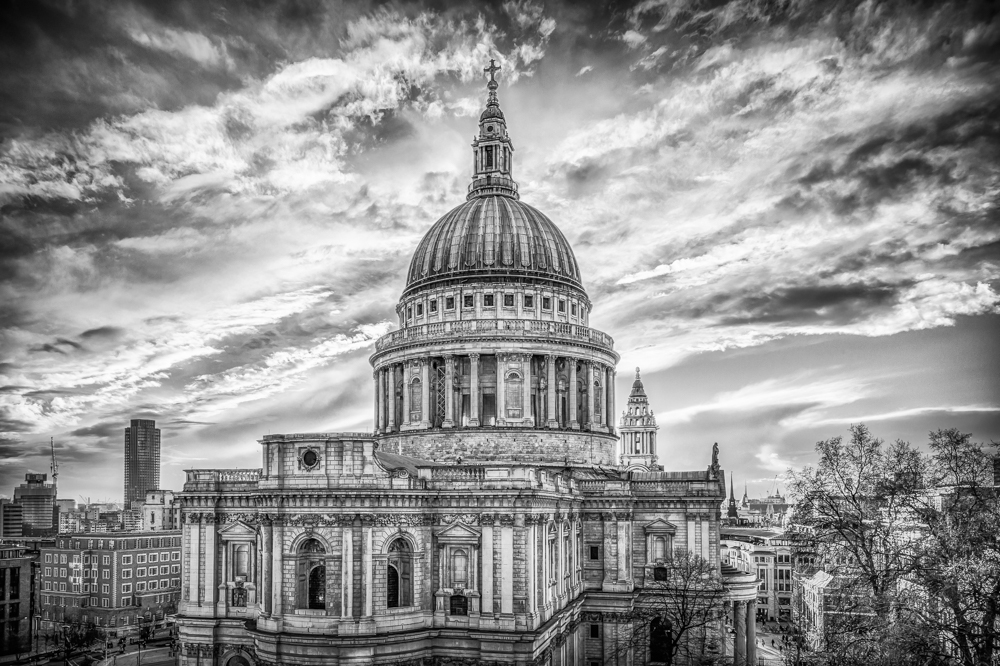 While London has an almost endless list of attractions, one of its most famous and most recognizable sights is St. Paul’s Cathedral.

St. Paul’s owes its very existence to tragedy – specifically, the Great Fire of London of 1666.  Gutted by the blaze, the Old St. Paul’s possibly could’ve been rebuilt – but city leaders decided to replace it with a new cathedral in a more modern style.  The plum assignment was given to Sir Christopher Wren, the greatest English architect of his time who designed a total of 53 London churches.  Wren, who was also a noted astronomer and geometrician, attained knighthood in 1673 at the ripe old age of 39, just two years before the cornerstone was laid for St. Paul’s.  Although few cathedrals in that era were built in a lifetime, Wren completed the project in just 35 years.

The dome of St. Paul’s, which is among the tallest in the world, has now dominated London’s skyline for over 300 years.  At 365 feet high, it was the city’s tallest building from 1710 to 1967.  For the hale and hearty, wonderful panoramic views of London await those who make the 528-step climb to the top.

From time to time in this space I have ballyhooed how I’m an unabashed anglophile.  I am sharing this particular image from London, however, for a much more personal reason – specifically, in memory of my sister, Marianne, who sadly lost her battle with cancer this week.  It was especially sad because my sister had just moved from Washington, D.C. to Seattle, intending to start the newest chapter of her life.  Marianne was an adventurous soul who loved to travel.  Unlike her boring brother who focuses on the United Kingdom, Marianne visited more than 30 countries in her lifetime, often by herself or in small escorted groups.  The name of the travel company she liked the most – Intrepid – describes her perfectly.  In March 2016, partner Carol and I hooked up with Marianne for a week of what was billed as the “London Pub Crawl.”  While we did hit a pub or two, we also saw many other highlights, including St. Paul’s.  The featured image was shot from the open-air terrace of an eight-story mall directly across the street from the cathedral.  I recall how Marianne, also an avid photographer, enjoyed herself as much as I did while we snapped away with our cameras.  No doubt about it, this image of St. Paul’s – especially in black and white with all those glorious clouds in the background – will always have extra special meaning for me.

Though there was good news this week on the vaccine front, the novel coronavirus is still very much with us.  As we approach the holiday season (and a strange season it will definitely be), we hope you and everyone in your world will stay healthy, safe, and strong.