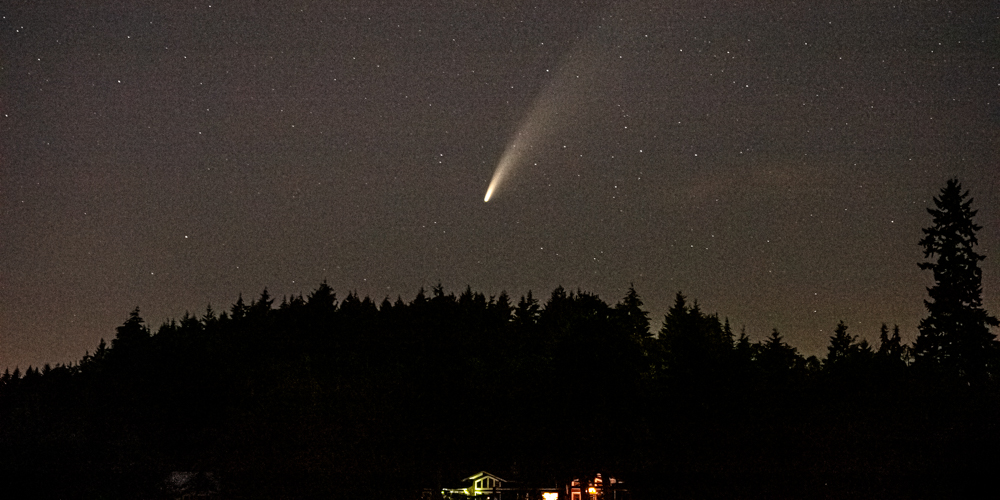 Many words in the English vocabulary start with “neo.”  Off the top of my head, “Neophyte,” “Neolithic,” “Neoconservative,” and “Neopolitan” (yum!) come to mind.  But thanks to a certain comet currently visiting our Northern Hemisphere, another “neo” word is causing quite the stir.  I’m referring, of course, to Neowise, the brightest comet to grace our skies in nearly a quarter century.

So let me give you some gobsmacking facts about our celestial guest, whose official name is C/2020 F3:

If you’re a stargazer, Neowise is in the vicinity of the Big Dipper and visible with the naked eye (assuming a clear dark evening).  Without a pair of binoculars or a telescope, however, it’ll look more like a fuzzy star moving slowly across the sky.  The featured image – shot six nights ago on Bainbridge Island 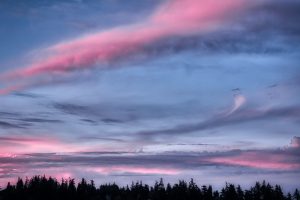 – has definition only because it was exposed for a full eight seconds.  The side image also was taken recently about one mile from where Neowise was photographed.  Talk about the difference between night and day!

Neowise will make its nearest approach to Earth on July 23 at a distance of 64 million miles.  But if you want to see the comet for yourself, you better act fast because it isn’t expected to return for 6,800 years.  Halley’s Comet, on the other hand, will next appear on July 28. 2061 – so mark your calendar!

As mentioned in previous posts, the doors of our Bainbridge Island gallery are once again open.  Huzzah!  Though our stock of Neowise images is admittedly low, we have a wide selection of landscape, urban, and travel images, including an excellent assortment of metal prints, canvas prints, custom-framed black-and-white prints, and fine art acrylic prints.  The side image is just one of many available in the Bainbridge Island gallery of our online store.