Bergh Images is pleased to announce the addition of two new galleries to its online store!  Both very much pertain to the Pacific Northwest, which makes perfect sense given how partner Carol and I live near Seattle.

One of the new galleries – called Ferries/Puget Sound – would be woefully incomplete if it didn’t include several shots of Mount Rainier.  With an elevation of 14,411 feet, Mount Rainier is not only the tallest mountain in Washington State but also the highest peak in the Cascades.  When not obscured by clouds (which is frequent), Mount Rainier dominates the southeastern horizon in most of the Seattle-Tacoma metropolitan area.  The featured image, for example, was taken near our home on Bainbridge Island, which is a 35-minute ferry ride from downtown Seattle.

Mount Rainier was originally called Tahoma by members of the local Salish tribe.  In the early 1790s, Captain George Vancouver, a British officer in the Royal Navy tasked with exploring and charting the Pacific Northwest, named the mountain after one of his naval buddies, Rear Admiral Peter Rainier.  In 1890, the United States Board on Geographic Names – and yes, this federal body still exists – officially declared that the mountain would be known as Rainier (much to the chagrin of Pierce County citizens who wanted it to be named Mount Tacoma).  Thanks to a resolution by the Washington state Senate, Mount Rainier underwent a temporary name change in February 2014 just prior to Super Bowl XLVIII.  While the moniker only lasted three days, Mount Seattle Seahawks had a nice ring to the locals, especially since the home team trounced Peyton Manning and his Denver Broncos.

The other new gallery is called – ta da! – Bainbridge Island.  While I won’t stand on my soapbox too long, Bainbridge Island is a unique and special place partly because it combines semi-rural living with a top-tier city like Seattle. 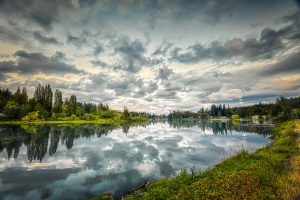 As shown by the gallery images (including the insert), its natural beauty is a huge bonus!

Like the existing galleries, the new Ferries/Puget Sound and Bainbridge Island galleries offer metal, canvas, and fine art acrylic prints in two different sizes.  As long as you live in the “lower 48,” shipping to your doorstep is free.  Should you prefer a custom size, just send us an inquiry by email and we will promptly reply!

It’s no secret travel has been heavily curtailed on account of the coronavirus outbreak.  Our gallery on Bainbridge Island did recently reopen, however, so please pop by for a visit if you’re in our neighborhood.  The health and safety of our customers is paramount, so we are strictly following the guidelines imposed by Gov. Inslee.