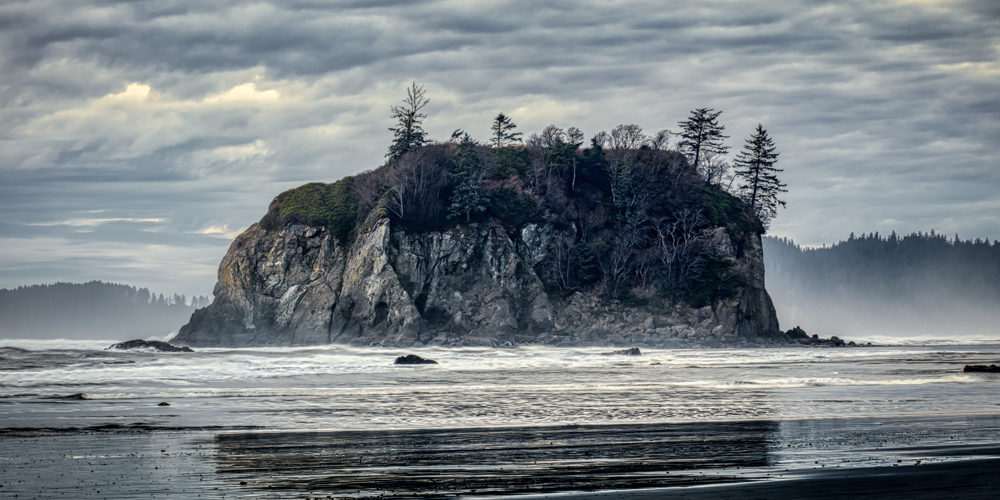 Many people, for good reason, view Ruby Beach as the most beautiful beach in Washington State.  Consequently, it was a no-brainer to stop there two weekends ago while partner Carol and I were en route to Lake Quinault for a quick getaway.  (For those not in the know, Lake Quinault is in the heart of the Quinault Rain Forest on the Olympic Peninsula in the northwest corner of the state.)

One nice thing about Ruby Beach is its accessibility.  The parking lot is located directly off Highway 101, and the easy trail down to the beach takes about five minutes to traverse.  The entrance is choked by many large drift logs, but navigating them to reach the expansive, pebbly beach is part of the fun.

But without a doubt, the main selling point of Ruby Beach is its gorgeous, knock-your-socks-off scenery.  Combined with the pounding surf and crisp ocean air, this is definitely a place where you can clear your head.  On top of that, its iconic sea stacks are both stunning and inspiring, especially towards the end of the day when the lighting becomes more dramatic.

Time for a short refresher course in Geology 101!  A sea stack (or just “stack”) is a geological landform consisting of a steep and often vertical column of rock in the sea near a coast.  They are formed over time when a headland is eroded by the force of waves crashing against the rock.  The force of the water weakens cracks in the headland, eventually causing it to collapse and form free-standing stacks or sometimes even a small island.

The sea stacks at Ruby Beach are some of the most well-known in the entire country (though the granddaddy of them all may be the monolithic Haystack Rock in Cannon Beach, Oregon, which stands 265 feet tall).  The featured image displays Abbey Island – so named because early settlers thought the stack looked like a church.  Sitting off shore a few hundred feet north of the beach, Abbey Island is home to sea otters and migratory birds, and flanked with starfish and mussels.  Those who choose to explore it had best consult their tide tables beforehand so they don’t get stranded!

“Stack at Ruby Beach” is already available in the Olympic Peninsula gallery of our online store, with options including metal, canvas and fine art acrylic prints in various sizes.  Here is the link: https://berghimages.com/galleries/olympic-peninsula/#gallery/adbca182543513b12edc262f5a03fc19/358/.  We also have matted prints of our Olympic Peninsula images in our brick-and-mortar store, which is located on Bainbridge Island just a short walk from the ferry terminal.  If you happen to be in our neck of the woods, please stop by for a visit!  We also have some attractive holiday stocking stuffers, including five different sets of sandstone coasters.

A surreal holiday season to be sure in the midst of the pandemic, but with positive news on the vaccine front, hopefully the light at the end of the tunnel will start getting bigger.  In the meantime, we hope you and everyone in your world stays healthy, safe, and strong.