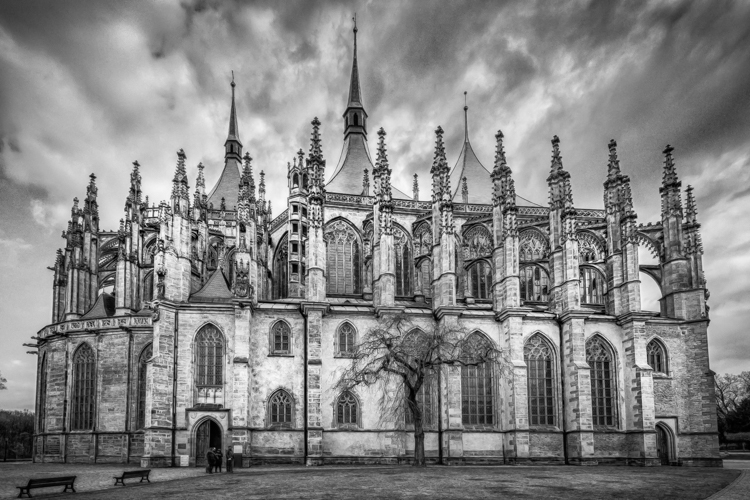 They just don’t make cathedrals (or churches) like they used to.

As I’ve said before, while medieval cathedrals and churches first and foremost are houses of worship, one need not be devoutly religious to appreciate their history and architecture.  Personally, I have always been awestruck by how the architects of yesteryear devised the technology to erect such magnificent stone structures which have stood the test of time for hundreds and hundreds of years.

While visiting Prague several years ago, partner Carol and I took a day trip to Kutná Hora, a city in Central Bohemia about 75 minutes away by train.  Nowadays, Kutná Hora is a laidback and frankly, not-so-scenic blue-collar town with a population of about 21,000.  But in its heyday from the 13th to 16th centuries, Kutná Hora accumulated so much wealth from its nearby silver mines that it competed with Prague economically, culturally, and politically.

The unmistakable crown jewel of Kutná Hora is the church – and cathedral wannabe – shown in the featured image.  In the Catholic faith, to achieve the status of a cathedral, a church must be located within a diocese ruled by a bishop.  Flush with cash from their mining wealth, Kutná Hora’s burghers decided in the 14th century to commission a church to be built in the style of a cathedral – the hope being that a diocese would later be established in the city.

Construction of the church – fittingly named after St. Barbara, the patron saint of miners – began in 1388.  As originally designed, it was supposed to be about twice the size of the present-day building.  Beset by frequent work interruptions, however, the grand visions of Kutná Hora’s leaders were ultimately thwarted when the city’s silver mines were exhausted in the late 1500s before the church could be completed.  All told, it took over five centuries for construction to come to an end, with the final restoration work not done until 1905.  Sadly, the diocese never came through either, so although sometimes called St. Barbara’s Cathedral, the more technically correct name is the Church of St. Barbara.  But really, what’s in a name?  The church’s unique design, including its three-tent roof and intricate flying buttresses, is magical – and the structure still has ample bragging rights as a UNESCO world heritage site and one of the most famous Gothic churches in central Europe.

With a separate gallery for cathedrals and churches still in the planning stages, “St. Barbara’s” is available in the Black and White gallery of our online store in three different mediums (fine art acrylic/metal/canvas) and three different sizes.  We also have a wonderful assortment of black and white images at our gallery on Bainbridge Island, so do please stop by for a visit if you happen to be in our area!  As we slowly edge closer and closer to more normal times, Carol and I sincerely hope that you and everyone in your world are staying healthy, safe, and strong.