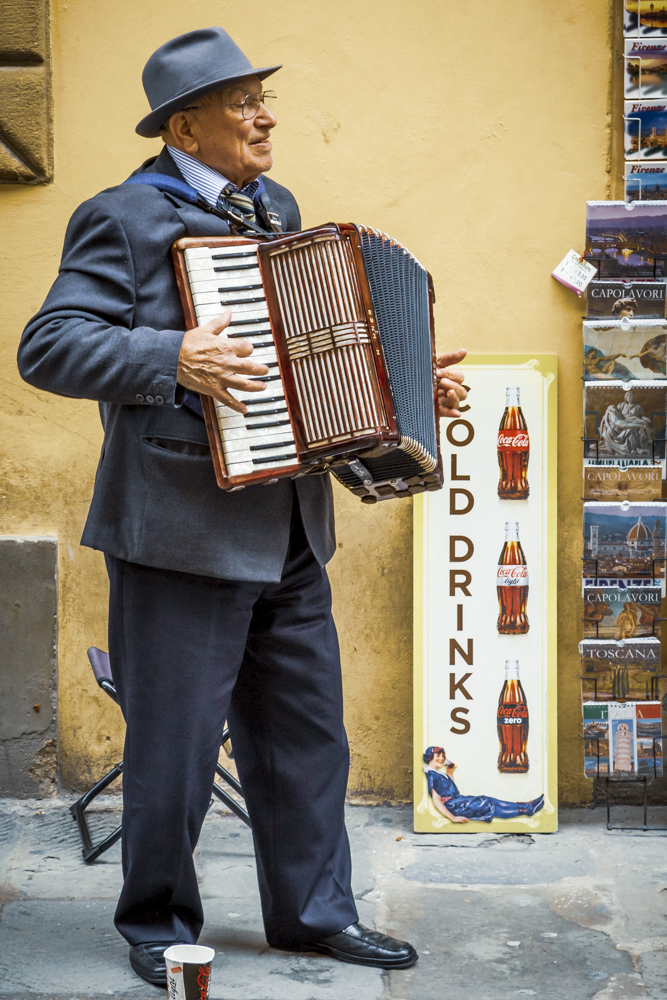 Never say never, but I doubt I’ll ever have a gallery on my website with images of people who are perfect strangers to me.

Here’s my thinking.  While I’m very passionate about photography, I’d much rather be the one holding the camera than the one posing in front of it.  In my view, you can divide the universe into two groups – those who are photogenic and those who aren’t – and at risk of sounding vain, I definitely fall into the latter category.  Since I dislike being photographed so much, I figure there must be others who feel the same way – so I’m not going to invade somebody’s privacy or space by zooming in on them and catching them unawares just because they happen to be out in public.

But there are exceptions to every rule.

This friendly old man was serenading passersby with his accordion on a side street in Florence, Italy.  It was clearly a photo opp just waiting to happen, and I’d be willing to bet a few euros that other tourists stopped to capture the moment too.  Though Giuseppe – not his real name unless I made a lucky guess – was all smiles and would happily make eye contact with you during a break, once he started playing his squeezebox he would close his eyes as if he were off in his own little world enjoying his own private concert.

But Giuseppe wasn’t an unpaid entertainer, mind you, as the Coca-Cola cup in front of him on the sidewalk was there for a reason.  My best guess is that Giuseppe probably supplements his pension quite handsomely with his street musicianship.  I, for one, quite willingly put a five-euro note into his cup, figuring that was a cheap price to pay for an image that will record some local color from Firenze a lot better than my memory ever will.

I am still working on my online gallery of images from my European travels, including Florence.  A nice assortment of matted, metal, and fine acrylic prints, however, are presently available at my gallery on Bainbridge Island.  For gallery hours, please visit my Contact page.