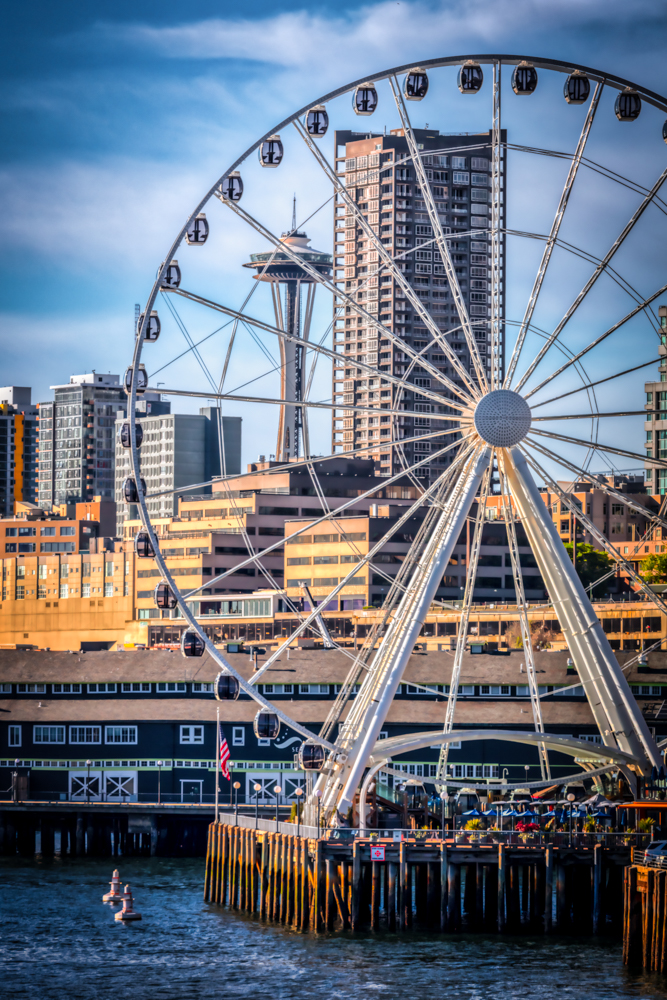 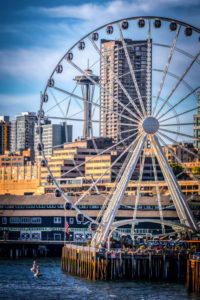 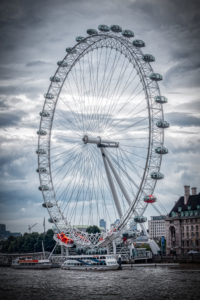 The distance between Seattle and London is 4,781 miles, or if you prefer, 7,725 kilometers.  But as shown by the two featured images, what both cities have in common is a large Ferris wheel on their respective waterfronts.  In Seattle, it’s the Great Wheel located at Pier 57 on Elliott Bay, while in London, it’s the Millennium Wheel – better known as the London Eye – situated on the south side of the River Thames.

The original Ferris Wheel was designed and constructed by George Washington Gale Ferris, Jr. as a landmark for the 1893 World’s Columbian Exposition in Chicago.  Since then, the generic Ferris wheel – sometimes referred to as an observation wheel – has become the most common type of amusement ride at state fairs in the United States.

The London Eye, which resembles a huge spoked bicycle wheel, is of much more recent vintage.  When it first opened to the public in 2000, the 443-foot-high structure was the world’s tallest Ferris wheel.  Its height has since been surpassed by four other Ferris wheels, including a monstrous 850-foot-high observation wheel that opened only two days ago in Dubai in the United Arab Emirates.  The London Eye is the most popular paid tourist attraction in the United Kingdom, drawing over 3.75 million visitors annually before the pandemic.  Its 32 sealed and air-conditioned passenger capsules – numbered from 1-12 and 14-33 – each hold up to 25 persons.  While not cheap – a standard admission presently costs £27 (about $37) – visitors get their money’s worth since a single revolution takes 30 minutes because the wheel rotates so slowly.

The Great Wheel in Seattle has some bragging rights, too.  At an overall height of 175 feet, it was tied with the Niagara SkyWheel in Niagara Falls, Canada, for the second tallest Ferris wheel in North America when it opened in June 2012.  Only the Myrtle Beach SkyWheel in South Carolina stands taller at 187 feet.  The Great Wheel extends 40 feet out over Elliott Bay, which probably explains why 550 tons of concrete were poured for its foundation.  It has 42 climate-controlled gondolas, 41 of which carry up to eight passengers for a 12-minute, three-revolution ride that costs $16.  The remaining option is the VIP gondola, a luxury cabin with leather bucket seats, a stereo system, and a glass-bottom floor that seats up to four adults for $50 a head.  If you prefer a freebie, however, the Great Wheel is covered with over 500,000 LED lights and there are colorful light show displays most evenings.

So which is the more pleasurable experience – the London Eye or the Great Wheel?  Sorry, Seattle, but 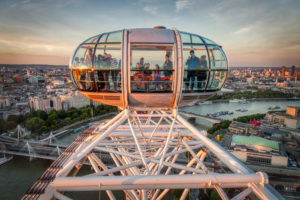 London wins hands down – and I’m not just saying that because I’m an unabashed anglophile.  As shown by the side image taken from the top of the London Eye, its 268-foot height advantage – combined with the stupendous views of the London skyline – is way too much for the Great Wheel to overcome.

But let me add one more positive comment about the Great Wheel.  Since it’s just a stone’s throw from the Seattle ferry terminal, that means it’s only 35 minutes away from Bainbridge Island – and the gorgeous views while crossing Puget Sound will surely prime ferry riders for the excellent assortment of fine art prints awaiting them at our gallery.  Partner Carol and I love visitors, so if you happen to be in our neck of the woods, please stop by and browse our wonderful selection of matted, metal, canvas, acrylic, and professionally framed black and white prints.