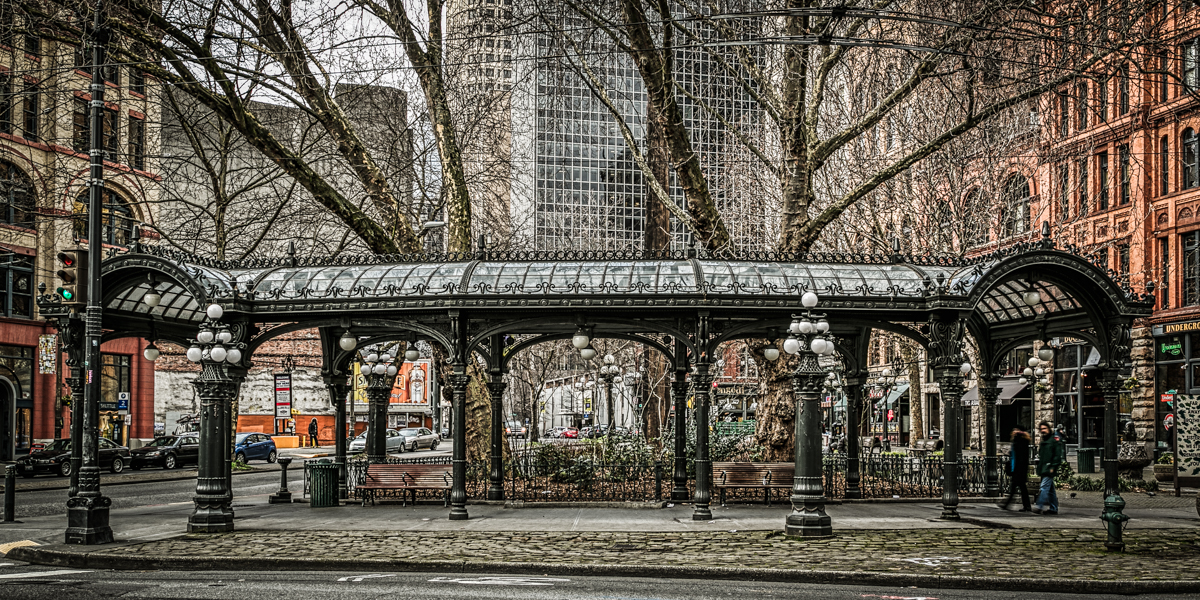 One of the iconic features of Pioneer Square is the iron and glass pergola nestled on the corner of 1st Ave and Yesler Way.  Built-in 1909 as a stop for the Yesler and James Street Cable Car Company, the pergola required a total of 65,000 pounds of ironwork.  Along with a nearby Tlingit totem pole, it was designated a national landmark in 1979.

The pergola took a hit – literally – in the early morning hours of Jan. 15, 2001.  That’s when a large commercial truck didn’t clear the corner, struck the pergola, and left it in pieces.  It was a sad day for the City of Seattle!  Happily, most of the restoration costs were paid by the firm that owned the truck, and the pergola enjoyed a grand reopening on Aug. 17, 2002.

When it first opened in 1909 as a cable car stop, the pergola and its exquisite architectural design attracted bustling crowds.  But the pergola’s popularity also stemmed from the fact that it stood above one of the nation’s most intricate underground “comfort stations” (which is a polite way of saying “public toilet”).  No expense was spared, as the subterranean restroom – known by some as the “Queen Mary of the Johns” – reportedly featured “marble stalls, brass fixtures, oak chairs, white-tiled walls, and terrazzo floors.”  A sign of the then times, there were 16 stalls for men and nine for women.  The pergola played a contributing role, as it was partially supported by four hollow pillars, which doubled as a ventilation system for the bathroom until it was permanently shuttered during World War II.

At our gallery on Bainbridge Island, we feature images from Pioneer Square and other Seattle locations on matted, metal, canvas, and fine art acrylic prints.  But whatever your preference, whether it be urban, landscape, black-and-white, and/or travel photography, I think you’ll agree we have an excellent assortment of photographic products.  For gallery hours, please consult the Contact page on our website.