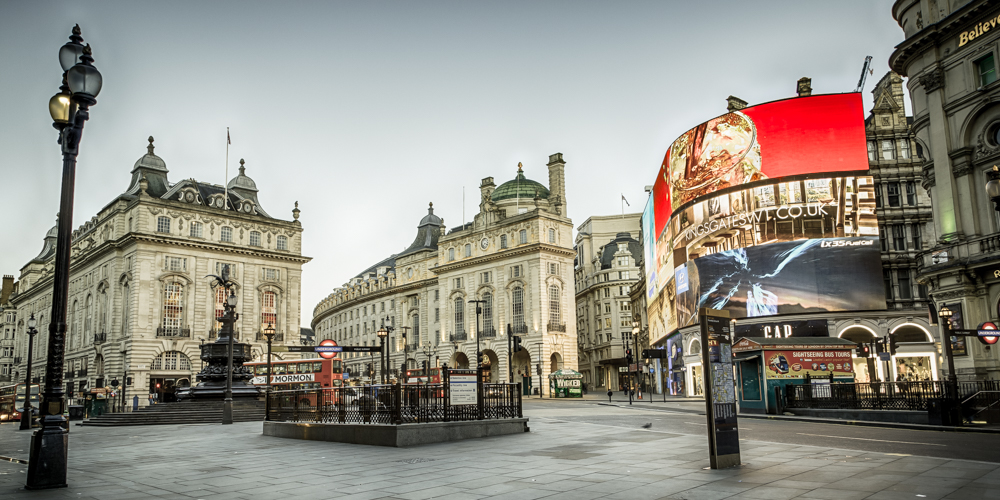 Shame on me.  Even though I’m an unabashed Anglophile, to date I haven’t featured a single image from the United Kingdom in any of my posts.  Time to fix that!

Piccadilly Circus – often described as the “Times Square of London” – is one of the best known intersections on the whole planet.  It connects five famous London streets – Regent Street, Shaftesbury Avenue, Covent Street, Glasshouse Street and Haymarket – and reportedly attracts nearly 100 million people each year.  The name “Piccadilly” is derived from the word for a 17th-century frilled collar called the piccadil.  An entrepreneurial tailor named Robert Baker made quite the pot of money by designing these piccadils, which financed an elaborate residence that he built for himself in the area.  The junction now known as Piccadilly Circus was named after Baker’s mansion (“Piccadilly House”) – and the name has never changed.

Situated in the heart of London, Piccadilly Circus blazes with neon billboards and displays, which serve as a colorful backdrop to a bronze fountain topped by a figure of a winged archer.  Although the locals refer to the statue as Eros, the Greek god of love, the British sculptor commissioned for the work in the late 19th century actually modeled it after his twin brother Anteros.  Bet you didn’t know Eros had a twin!

Piccadilly Circus is one of the most famous advertising spots in the world.  Coca-Cola – its longest continuous advertiser – has had a sign at Piccadilly Circus since 1954.  As shown by the featured image, its iconic sign curves round with the building – and features state-of-the-art technology.  The latest digital version – installed in October 2017 – has an ultra-high definition 4K resolution screen with 11,858,400 pixels and 281 trillion colors.  This definitely makes me want to upgrade my puny wide-screen TV at home!

If Piccadilly Circus attracts hordes of people year-round, you might be wondering why the featured image is devoid of humans.  Fair question!  I don’t use Photoshop, so no, I didn’t remove them digitally.  The simple truth is that people need to sleep even in London – so the key is to arrive before the crack of dawn when people are still slumbering.  I took the subway from my hotel in the Paddington area to the Piccadilly Circus stop, and it was probably the first and last time I’ll ever have a carriage entirely to myself.  My earliness paid off, however, as I only had to share Piccadilly Circus with one lone pigeon.

“Piccadilly in the A.M.” is presently available at our Bainbridge Island gallery, along with an excellent assortment of other panoramic images.  If you are in the neighborhood, please stop by!  For hours, please consult the Contact page on our website.