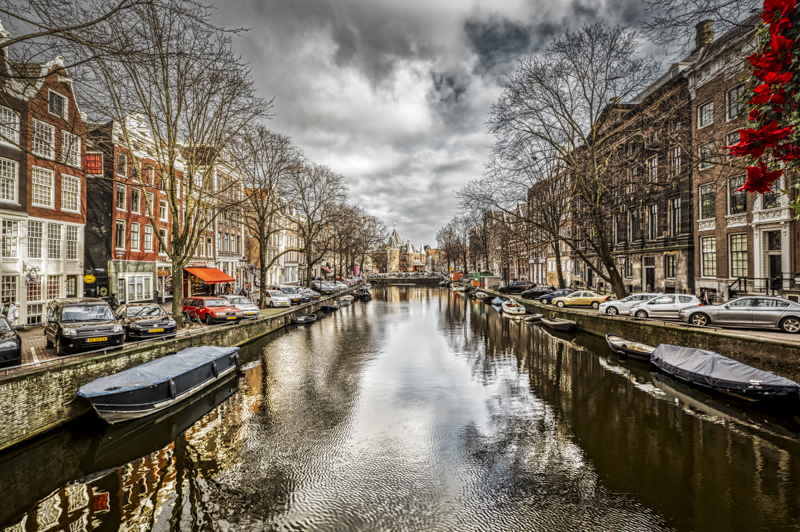 This is another post relating to Amsterdam, which was the second half of a recent canal-themed trip that also included Venice.

As observed in an earlier post, while Venice and Amsterdam are tourist meccas with much in common, including exquisite canals and world-class museums, they are hardly carbon copies of the other.

One huge disparity relates to method of transportation.  Since cars don’t exist in Venice, people get from Point A to Point B by boat or on foot.  But in Amsterdam, while cars are very much an option, the indisputable king is the bicycle.  Approximately one third of Amsterdammers commute to and from work on a bike, which isn’t too surprising when you consider the city has more pedal-powered devices than permanent residents.

Thanks to scarce parking and 60 miles of canals, it is commonplace to see rows of unattended bikes, with locked chains looped around their wheels, hugging the banks of Amsterdam’s canals or its bridges (see lower image). 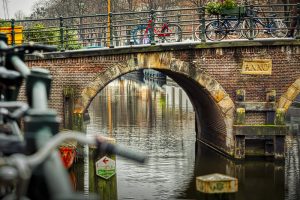 Interestingly, this has led to a local phenomenon called “bike fishing.”  Every year, WaterNet – the city’s official water company – fishes up between 12,000 and 15,000 bikes.  It’s generally assumed that thieves and vandals are the most likely culprits, along with the occasional bike owner who can’t be bothered with taking his broken ride to the dump.

Another distinct variance between the canals of Venice and Amsterdam is their respective architecture.

In Venice, whose canals were made by nature, the splendid Gothic palazzos use almost every square inch of land and border the water’s edge.  Not quite so in Amsterdam, whose man-made canals – laid out in a pattern of concentric half-circles – were the product of deliberate city planning.  As shown by the featured image, the canal houses of Amsterdam are set back from the canal with a roadway in between.  Many of them were built during the 17th century at the height of the Dutch Golden Age, and served as homes and offices for the emerging merchant, artist, and political class.  Due to the inherent space restrictions in place and a policy of taxing buildings by the width of their frontage, Amsterdam canal houses were built in a tall-and-skinny style, with large windows and ornate gables, which has made them the signature of the city to this day.

It’s just a short matter of time before images from Venice and Amsterdam will be available at our online store and our gallery on Bainbridge Island.  But should you be in our neighborhood, do please stop by for a visit, as we always have an excellent assortment of matted prints, metal prints, canvas prints, custom-framed black-and-white prints, and fine art acrylic prints on hand.  For gallery hours, please consult our Contact page.