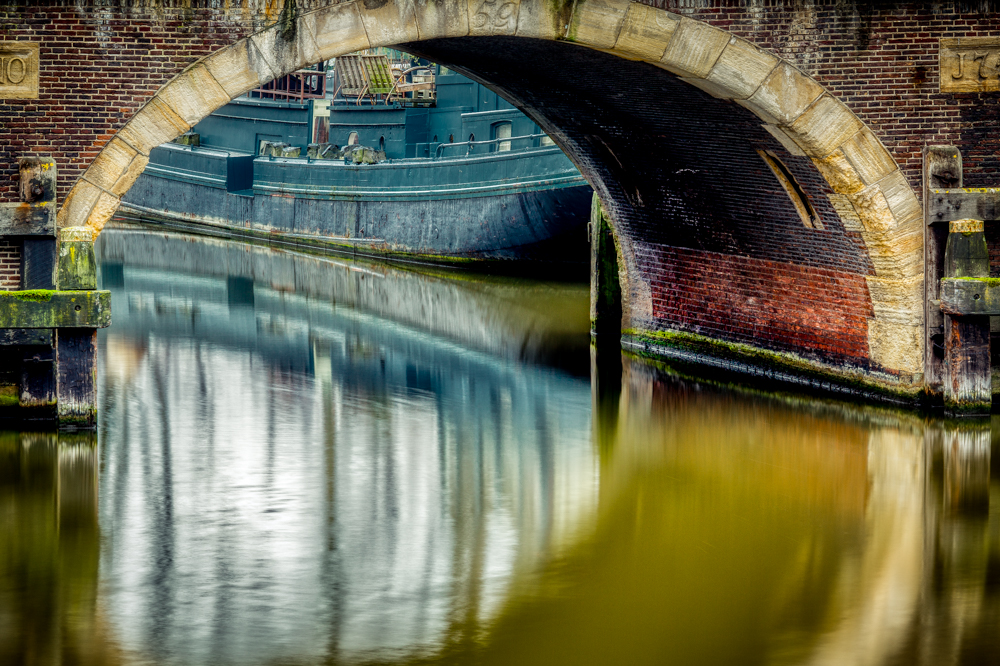 My last two posts pertained to Venice, which was the first half of a canal-themed trip that partner Carol and I recently took to celebrate the New Year.  It’s now time to highlight Amsterdam, which is the nominal capital of the Netherlands.  (While the Dutch Constitution says Amsterdam is the capital, the official seat of government is The Hague, which is the home of the Netherlands’ monarch, parliament, and supreme court.)

Amsterdam has been described as the most watery city in the world.  For one thing, its canals and harbors fill a full quarter of the city’s surface (which isn’t very surprising when you consider almost one-third of the Netherlands is below sea level).  Although Amsterdam is often called “Venice of the North,” one could make a plausible argument that it ought to be the other way around because the total length of Amsterdam’s 165 canals – approximately 60 miles – easily exceeds the length of the 150 canals in Venice.  Plus, Amsterdam has three times more bridges – 1,281, to be exact – than Venice.

There is no standard way to become a “canal city.”

In the case of Venice, most of the credit goes to Mother Nature.  When Venice was originally settled in the 5th century by villagers from what is now mainland Italy, the canals were essentially the naturally occurring inlets and channels between the marshy islands of the Lagoon of Venice.  The heart of Venice has always been its Grand Canal, which bisects the city in the shape of a backward “S.”

In contrast, the canals of Amsterdam, which once upon a time was mostly swampland, were all man-made.  In the 16th and 17th century, Amsterdam was governed by a body of wealthy lords and businessmen – called heren regeerders – who invested heavily in the development of the canals.  By systematically draining one section of swampland at a time, they caused the city’s three most prominent canals – Herengracht (named after the town leaders), Prinsengracht, and Keizersgracht – to be built.  Instead of straight lines, however, the waterways were laid out in a pattern of concentric half-circles, effectively enclosing the town’s medieval center.  This historic canal belt –Grachtengordel in Dutch – is now a UNESCO World Heritage Site.

The weather wasn’t always cooperative during our five-day stay in Amsterdam, with gray overcast skies the norm.  But not to worry, that just means you point the camera lower and eliminate the sky altogether.  The featured image shows one of Amsterdam’s ubiquitous bridges, with a sizable – and well-worn – houseboat lurking in the background.  I took this shot one morning just two blocks away from our wonderful B&B on Herengracht .  Like Venice, the canal district in Amsterdam is best explored on foot, with a new sight  or discovery around every corner or turn.

It is only a short matter of time before we’ll have Amsterdam images available online and at our gallery on Bainbridge Island.  But should you be in the neighborhood, do please stop by for a visit, as we always have an excellent assortment of matted prints, metal prints, canvas prints, custom-framed black-and-white prints, and fine art acrylic prints on hand.  For gallery hours, please consult our Contact page.