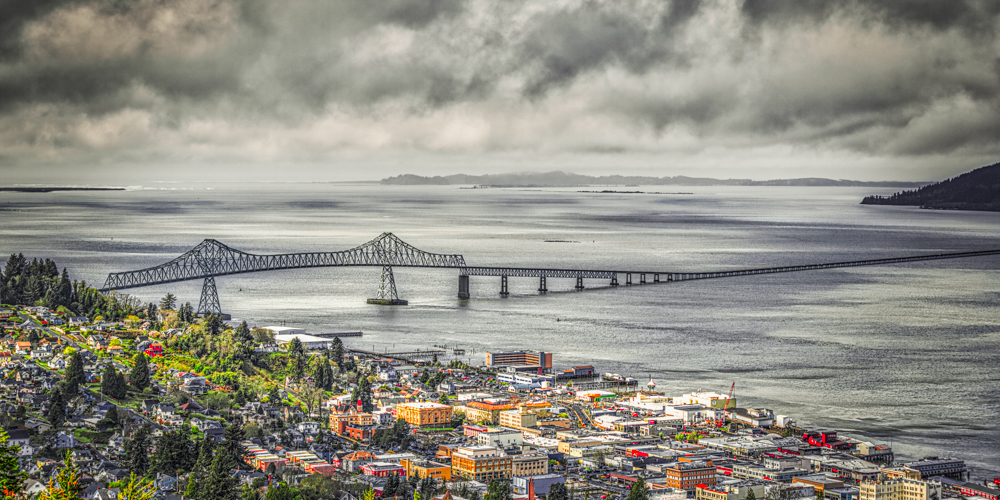 The City of Astoria, situated in the northwest corner of Oregon near the mouth of the Columbia River and just a short drive from Pacific Ocean beaches, is famous for many different reasons.

For one thing, it’s the home of Lightbox, a very cool photographic gallery located near the waterfront in the heart of downtown Astoria.  Thanks to Lightbox, which accepted one of my black-and-white images for an exhibition featuring the photographic talent of the Pacific Northwest, partner Carol and I had the perfect excuse for a short but scenic getaway to the Oregon coast before scurrying back to Bainbridge Island to attend to our own gallery.

Okay, now that we got that minor self-promotion out of the way, let’s talk about some of the real reasons why Astoria, with a population just over 10,000, is on the map.

First of all, Astoria has an impressive history, starting with its status as the first American settlement west of the Rocky Mountains and the oldest city in Oregon.  The Lewis and Clark Expedition spent the winter of 1805-1806 at Fort Clatsop, a small log structure just southwest of modern-day Astoria.  The town is named for John Jacob Astor, a New York financier whose American Fur Company founded Fort Astoria in 1811 and established a monopoly in the fur trade in the early 19th century.  Astoria can also lay claim to the first U.S. post office west of the Rocky Mountains, established in 1847.

With the great Columbia River ensuring easy access to the interior, Astoria’s importance as a port city and trading center grew exponentially as immigrants flocked to the Oregon Territory.  With a strong commerce centered on fishing, fish processing and lumber, the town was an economic hub in the Pacific Northwest for more than 100 years.  As recently as 1945, about 30 canneries still thrived alongside the Columbia River.  Between declines in the salmon fisheries and lumber industry and the ever-growing dominance of Seattle and Portland, however, Astoria’s star eventually faded.  The coup de grace was the discontinuance of railway service in 1996 because the town no longer provided a large enough market.  Nobody should feel too sorry for Astoria, however, which has undergone a tourism-based renaissance thanks in part to the movie industry.  Remember The Goonies?  This cult film written by Steven Spielberg, along with several other box office hits like Arnold Schwarzenegger’s Kindergarten Cop, the Free Willy movies, and The Ring Two, all helped showcase Astoria’s small-town America charm and gorgeous setting.

The featured image highlights the Astoria-Megler Bridge, which links Astoria with Point Ellice in Washington on the opposite shore of the Columbia River.  Until it opened in 1966, the two states were only connected by ferry service.  Just over four miles from end to end, it’s the longest truss bridge on the North American continent and has only one line of traffic in each direction.  If you’re an Astoria fan (or simply love truss bridges), prints of this image are available in the Panoramas gallery of our online store.

Fortunately, Bainbridge Island is accessible by both ferry service and bridge.  If you happen to be in our area, we always have an excellent assortment of matted prints, metal prints, canvas prints, and fine art acrylic prints in different genres, as well as custom-framed black-and-white prints.  In the meantime, as we cautiously make our way through the latest stage of the pandemic, Carol and I sincerely hope that you and everyone in your world are staying healthy, safe, and strong.