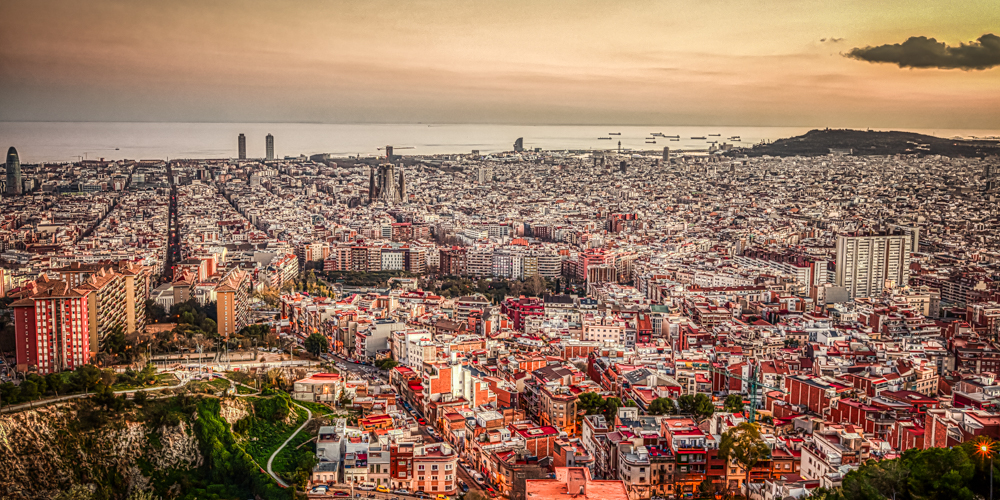 This is another post about Spain, which partner Carol and I visited the first two weeks in January.  Little did we then know that within six weeks of our return, the first cases of the coronavirus would be reported in both Spain and the United States.  You won’t hear much more from me about this subject, however, because the internet, and other media outlets, is already saturated with coverage of the outbreak.  Instead, my modest goal is to offer posts providing a short diversion to those who enjoy photography.  In these trying times, an occasional distraction certainly can’t hurt.

Situated on the Mediterranean Sea in northeast Spain, Barcelona is a sprawling metropolis with about 1.6 million inhabitants – and that’s just within the city limits!  Founded by the Romans in the late first century B.C., Barcelona has a rich cultural heritage.  Host of the 1992 Summer Olympics and home of one of the world’s most famous football clubs (FC Barcelona), the city well deserves its status as a major global player in areas like commerce, finance, tourism, science, fashion, and the arts.

When Carol and I take a trip overseas, it’s a foregone conclusion that photography will be involved.  If it’s a brand new destination, I routinely investigate where the “killer views” are as part of my pre-trip research.  While superb images can obviously be had from street level, a healthy gain in elevation is usually required if you want to shoot a skyline or panorama.  For example, for an exquisite view of London, I would strongly recommend climbing to the top of St. Paul’s Cathedral.

Barcelona is partly located on a hillside that gradually flattens out as it approaches the Mediterranean.  My task at hand was to figure out the best place for a panoramic shot of Barcelona which included the Mediterranean coastline.  My guidebook and travel websites all recommended Montjuic, a prominent hill in the southwest part of Barcelona with excellent views of the city and its harbor.  Its highest point, with an elevation just over 500 feet, is Montjuic Castle, which was originally built in the late 17th century as a military fortress.  But while the views were admittedly impressive, the photography part just didn’t work out.  For one thing, much of the city was obscured by the wooded hillside.  Then, while setting up my tripod, I was politely – but firmly – told by castle security that tripods weren’t allowed.  In short, mission not accomplished.

As shown by the featured image, though, we ultimately met with success.  Since many Barcelonans speak English, I took a chance and randomly asked one of the locals where she would go for the best view of the city.  Pausing a few seconds, her two-word reply was “the Bunkers.”  After hitting the internet at our hotel, I quickly learned that she was referring to the Bunkers del Carmel, a 360-degree viewpoint once used as a base for anti-aircraft weaponry to defend the city from aerial attacks during the brutal Spanish Civil War in the 1930’s.  Its artillery long gone, the bunkers – with its superior 850-foot elevation – have become the trendy hotspot for a spectacular bird’s-eye view of Barcelona, especially at sunset.  (Montjuic can be seen in the top right portion of the image.)

For the health and safety of our customers and the Bainbridge Island community, our gallery is temporarily closed.  For further updates, please visit our Facebook page.  We are using this down time to update our online store, which should soon feature new galleries including one with images from our recent Spain trip.  Thank you for reading our blog – and please do whatever you can to stay safe and healthy!