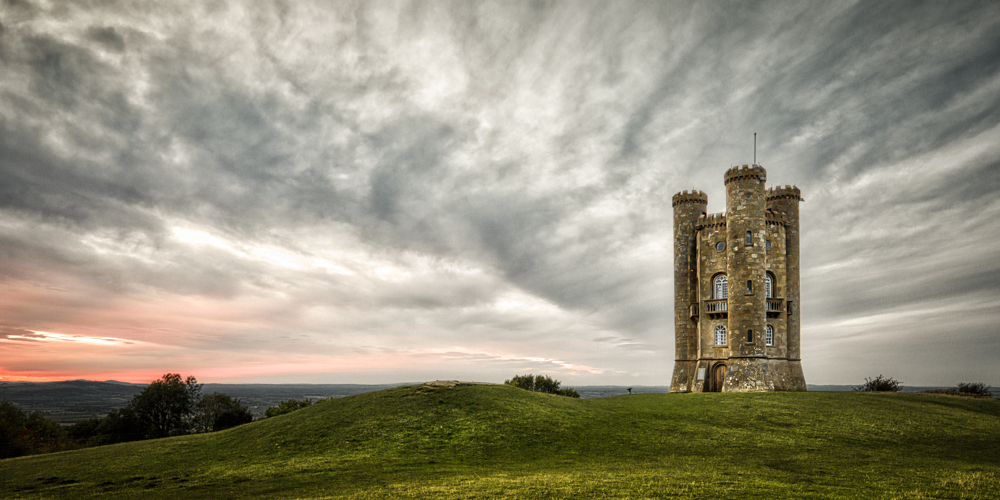 I know travel isn’t on the horizon anytime soon, but given how current events are so depressing right now, ruminations about travel at least provide a temporary diversion.

So let’s talk about follies!

A folly is a costly ornamental building serving no practical purpose; oftentimes, it’s a tower or mock-Gothic ruin built in a large garden or park.  The United Kingdom, as it turns out, seems to have an inordinate share of such structures.  As but one example, the featured image depicts the Broadway Tower, which is situated in a heavenly part of southwest England known as the Cotswolds.  In its heyday, the Cotswolds – with gentle hills perfect for grazing sheep – was well-known throughout medieval Europe as the source of some of the best wool available.  Though the industrial revolution eventually put the weavers and their looms out of business, the region is now known for its picturesque towns and villages – all frozen in time for centuries – as well as its glorious countryside.

The Broadway Tower, which stands 1,024 above sea level, is one of England’s most striking follies because of its spectacular view.  On a clear day, one can supposedly see as many as 16 counties in England and Wales.  The tower, which is 60 feet high and resembles a mock castle, was built in 1789 by George Williams, the 6th Earl of Coventry, for his wife.  The hilltop had long been used as a beacon point, and Lady Coventry reportedly wondered whether a beacon could be seen from Croome Court, her mansion 22 miles away in nearby Worcestershire.  I am happy to say that in favorable weather, the tower could be seen quite clearly!  Nowadays, it’s part of a 35-acre country park, with exhibitions, restaurant, and a gift shop in the tower.  If you’re really lucky, the resident herd of red deer may make an appearance.

The featured image is available in the Panoramas gallery of our online store in three different mediums (fine art acrylic/metal/canvas) and two different sizes.  As long as you live in the “lower 48,” shipping is always free!  We also have a nice assortment of matted prints from the United Kingdom at our gallery on Bainbridge Island, so do please stop by for a visit if you happen to be in our area!  Partner Carol and I fully appreciate how many of you may still be hunkering down on account of Covid-19, however, and we sincerely hope that you and everyone in your world are staying healthy, safe, and strong.