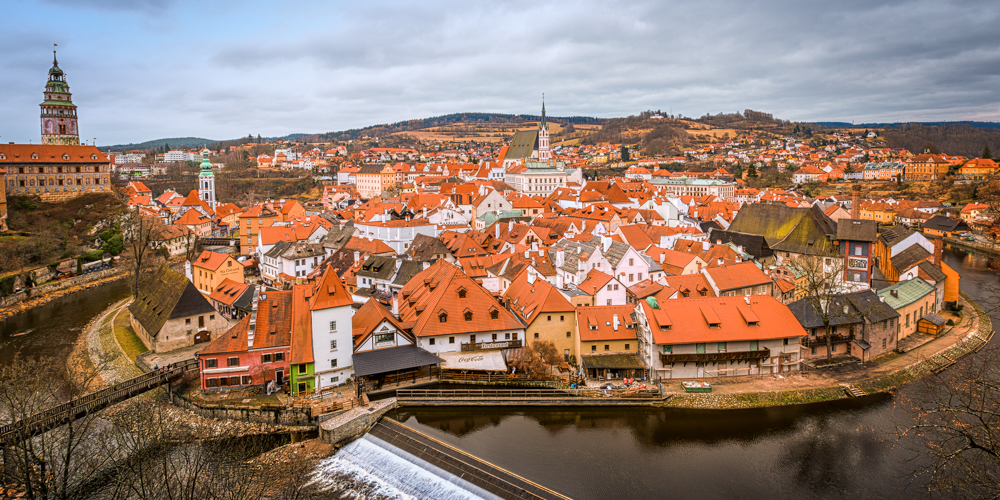 Some people have been referring lately to “covid-19 fatigue” – but I think that’s way too narrow.  How about the following: “politics fatigue”; “election fatigue” (including the recent presidential debates); “natural disaster fatigue”; “tweet fatigue”; and “partisanship fatigue”?  Actually, to paint things with a really broad brush, why not just go with “reality fatigue”?

In short, it’s time for a brief escape – which brings me to the featured image depicting Český Krumlov, a tiny medieval village in the South Bohemia region of the Czech Republic.

Just two hours south of Prague, the enchanting town of Český Krumlov feels lost in a time warp.  Having escaped the bombings in World War II, it is extraordinarily well-preserved and was designated a UNESCO World Heritage Site in 1992.  (As of June 2020, there are only 1,161 such sites on the entire planet; for more information, click here.)  The town evolved under the watchful eye of the Rosenbergs, Bohemia’s top noble family once upon a time, who ran the place for three centuries starting in 1302 and considerably influenced its present-day appearance.  The 16th century was its Golden Age, when Český Krumlov hosted artists, scientists, and alchemists from all over Europe.  Alas, after running out of money to fund their lavish lifestyle, the Rosenbergs sold the territory in 1602 to Emperor Rudolf II of Habsburg (talk about a qualified buyer!).

Český Krumlov, which roughly translated means “Czech Bend in the River,” is aptly named because a horseshoe bend in the twisty Vltava River almost completely encapsulates the historic center (“Old Town”), forming a tight peninsula.  Though geographically small, one could easily spend all day exploring its cobbled lanes, winding streets, and tiny squares.  The main square – lined with a mix of Renaissance and Baroque homes of burghers (all built on 12th century Gothic foundations) – exudes Old World charm.  No fast food option here, as McDonald’s thrice tried to get a spot but got rejected each time. 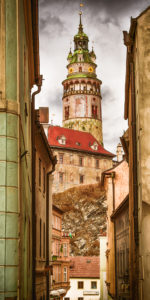 The architectural gem of Český Krumlov is its fairytale castle, which sits atop a rock promontory overlooking the Old Town.  The Round Tower (see side image, as shot from the main square) – its 16th-century Renaissance paint job carefully restored – is strikingly colorful in an almost exotic way.  After partner Carol and I ascended the 163 well-worn wood and stone steps to the top, our reward was an incredible 360-degree view of the town and its surroundings.

Both images featured here are available in the Panoramas gallery of our online store.  Another option is to visit our gallery in Bainbridge Island, where we always have a wide selection of travel images in a variety of mediums, including metal, canvas, and fine art acrylic prints.  With overseas travel plans on the indefinite hold for most of us, this is a perfect time to decorate your home or office with memories of past trips, or inspirations for future trips.

As always, we hope everyone is staying healthy, safe, and strong in these trying and stressful times.