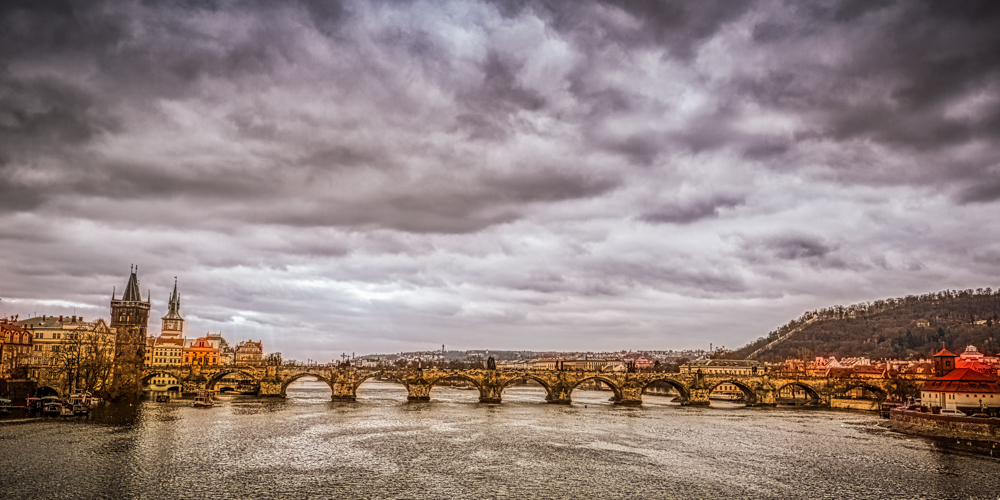 Old world charm undoubtedly means different things to different people.  In my way of thinking, it refers to a place, preferably of European flavor, that is steeped in history, traditions, and culture as if frozen in time, with amazing and colorful architecture.  As but one example, I will use Prague, the magnificent capital of the Czech Republic.

The featured image depicts the Charles Bridge, a Prague icon that crosses the Vltava river in the heart of the city.  Commissioned by King Charles IV two years after he was crowned the Holy Roman Emperor, the bridge made Prague the most important city in the region for many centuries to come.  Legend has it that construction began in 1357 on the 9th of July at exactly 5:31 a.m., with the first stone being laid by Charles IV himself.  The emperor, who was a strong believer in numerology, reportedly felt this specific time – which forms a numerical palindrome (135797531) – would imbue the bridge with additional strength.  There may be something to this because the Gothic structure, which was completed in 1402, is one of the few medieval bridges still standing today.

A UNESCO World Heritage site, the Charles Bridge is 1,693 feet long and nearly 33 feet wide.  As the only means of crossing the Vltava river until 1841, for centuries it was the lone connection between the city’s Old Town and Prague Castle.  Although trams and buses were allowed to traverse the bridge starting in the early 1900’s, city planners, rightly concerned about the wear-and-tear factor, restricted the bridge to pedestrian traffic after World War II.

The below image shows an easterly view of the Charles Bridge with the Old Town in the background.  The Old Town Bridge Tower (upper left), which was completed in 1380, was conceived as a triumphal arch through which the Kings of Bohemia would march on their coronation procession from the Old Town up to Prague Castle.  (Unfortunately, no royalty was in town when partner Carol and I visited the city.) 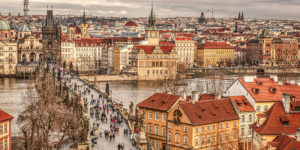 The last image illustrates a westerly view of the bridge with the extensive Prague Castle complex in the background.  The visible sculptures and statues of various saints and patron saints, erected between 1683 and 1714, are among 30 that populate the length of the balustrade. 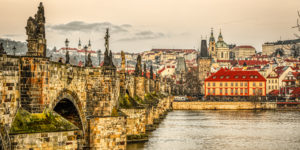 If old world charm allures you, I heartily recommend a trip to Prague once overseas travel becomes reasonably safe again.  In the meantime, the above images are all available in the Panoramas gallery of our online store, while additional images and prints of the Czech Republic are offered at our brick-and-mortar gallery on Bainbridge Island.  If ever in our neck of the woods, please stop by for a visit and swap travel experiences with us!

As always, Carol and I hope everyone is staying healthy and safe as we continue to navigate through these tricky times.