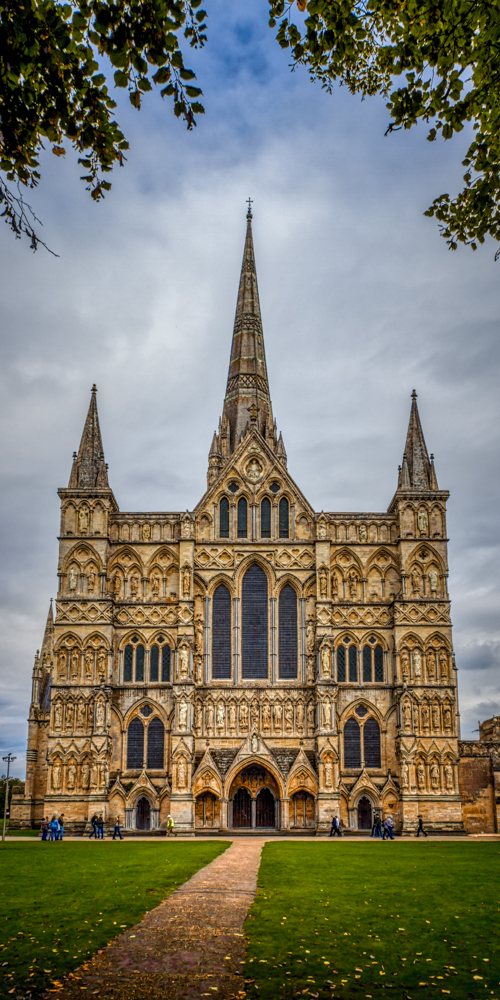 Even though religion was not in my family’s upbringing, I have a confession to make: I am a sucker for ancient cathedrals and other historic places of worship.

For devout anglophiles like me, one cathedral that should easily make anyone’s shortlist is situated in Salisbury, a medieval market town in the southern English county of Wiltshire.  Most grand churches evolve slowly over centuries, resulting in a completed structure that spans a multitude of architectural styles.  Not so with Salisbury Cathedral, which was built between 1220 and 1258 in a style now called Early English Gothic.  Its spire – the tallest in Great Britain at 404 feet – was a nice finishing touch added around 1330.  And to really top it off, the Salisbury cathedral houses one of the few original copies in existence of the 816-year-old Magna Carta.

Partly because it’s just nine miles from Stonehenge (which I recently featured in June), I’ve always had a soft spot for Salisbury.  My affinity is clearly shared, given how the smallish city (pop. 62,216) was recognized in 2019 by a well-known British newspaper (The Sunday Times) as the best place to live in the United Kingdom.  Thanks to a free digital subscription to the local daily (Salisbury Journal), I’ve been keeping tabs on the area for several years now.  One recent article which made my day discussed how Stonehenge is the number one “beauty spot” in the UK.  Another story covered a controversial decision by local health authorities to offer Covid-19 vaccines to 45,000 Wiltshire children aged 12-15.  A different piece described how Irish travelers were turned away (“We don’t want you here”) from a caravan park because of a “no gypsy” policy, while another reported how two drug dealers found large quantities of heroin and cocaine in a Salisbury car park received lengthy jail sentences.  And on a much more upbeat note, I also learned how a London TV celebrity chef had bought a “boozer” in Salisbury – more particularly known as The Five Bells pub on Salt Lane – intending to put a speedboat in the pub garden where guests can more happily imbibe in a pint or two.

If your travel plans have been placed on hold by the pandemic, or if you’d like to stay in touch with a favorite spot that you’ve visited in the past, I heartily recommend that you go online and find a free digital subscription to the overseas newspaper of your choice.  Besides being entertaining and informative, it’s also a poignant reminder that residents of foreign lands – including those who live in the best place in the UK – similarly have to deal with the realities of the coronavirus, ethnic prejudices, crime, and the like.  But hey, to the extent that commonality shrinks the globe and makes all of us feel a little more connected, maybe that’s not such a bad thing?

I have a positive development to report!  While the featured image of Salisbury Cathedral is available in the Panoramas gallery of our online store, it will soon be available in our United Kingdom gallery that will be making its debut in the very near future.  Alternatively, any anglophiles in our neck of the woods should of course feel free to visit our gallery on Bainbridge Island where we always have a plentiful supply of UK prints on hand.  In the meantime, as we extra-cautiously make our way through the latest surge of the pandemic, partner Carol and I sincerely hope that you and everyone in your world are staying healthy, safe, and strong.