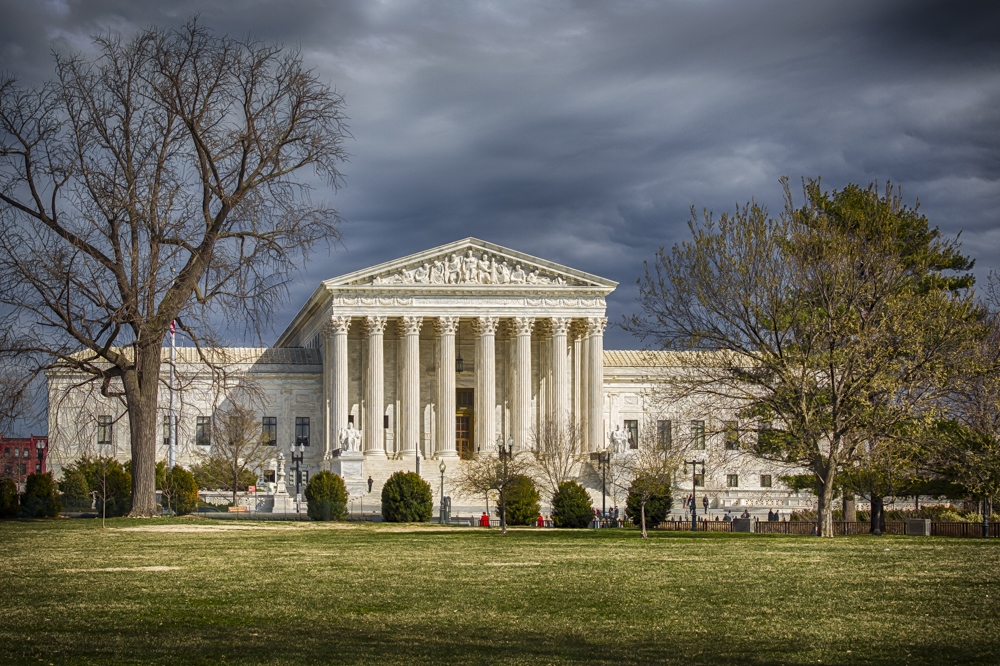 I travel to Washington, D.C. from time to time to visit my sister and also her daughter, who got married four years ago.  My niece and her husband now have three young children, including 11-month-old twin boys, whom until recently I had never met. Tired of being the bad uncle, I used frequent flyer miles earlier this month for a short trip to our nation’s capital to visit the little tykes.

Most people know our government is composed of the executive, legislative, and judicial branches.  In my mind, nothing symbolizes the judicial branch more than the Supreme Court Building, which has the imposing address of 1 First Street and faces the U.S. Capitol Building where, rumor has it, members of Congress occasionally work.

Though I didn’t have much time for photography this trip, I always make a point of snapping a shot or two of the Supreme Court Building whenever I am in town.  Built in the Neoclassical style, the edifice was completed in 1935.  Times have sure changed since then because the project costs actually beat the budget authorized by Congress by some $94,000.

If you google “supreme court building photos,” almost every image features some impressive aspect of the west-facing façade, which was made of marble quarried in Vermont.  These make for very pleasing shots, and I’ve taken lots of them myself.  But ostentatious exterior and grandiose name aside, I’ve always viewed the Supreme Court Building as the home of “the People’s Court” – a place which serves not only the rich and privileged but also functions as the last bastion for the protection and preservation of individual rights.  For this reason, I much prefer the above image.  Not sure exactly why – maybe it’s the expansive lawn, the trees, and the smaller scale of the building? – but it just seems to have a more “homey” look.

For more images from the District of Columbia, please stop by my gallery on Bainbridge Island.  For gallery hours, please visit my Contact page.

Next post: A little more history about the Supreme Court Building and its architecture.

P.S.: A quick baseball update.  In my post last week, I featured a prior image of opening day at Safeco Field because the 2018 major league baseball season was almost upon us.  I am happy to report King Felix and the Mariners won their season opener against the Cleveland Indians, 2-1, in front of a record home crowd of 47,149, and they are currently only half a game behind in the American League West Division.  Just 159 games to go until the playoffs!